I started to write a story called “When I was Eight.”

I typed the truth and then I copied and pasted details of the story that were explicit. I have a file labeled, graphic details, child sexual abuse.

Every few weeks I open the file and read it. I edit the story and then I click, Save Draft. I don’t publish the story. I am embarrassed.  I think the molestation was my fault. I think I should have known better.

On page twelve of my baby book my mother wrote in cursive handwriting with blue ink  a list of presents that were given to me on my first birthday.

Mummie and Daddy and Neal gave me a 2″ doll and Auntie Anne and Uncle Carl were  here for supper and they  brought me a five-year diary for when I grow up. I wasn’t feeling very good as I’m getting 2 new teeth and they sure hurt but everyone was making such a fuss, cause I’m a yr old that I was trying to be as happy as I could. 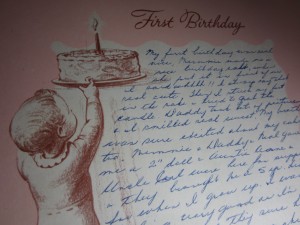 The house on Avenue K had three bedrooms, one for my mom and dad, one for my brother, and one for me. My bedroom was at the end of the hallway, across the hall from my brother’s room.

The man we called Uncle Carl stayed in my bedroom. He slept in my twin bed. My twin bed with the pink covers.  I ordered the pale pink Bedspread with ruffles around the bottom and matching curtains  from the Sears catalog. The pages in the Sears catalog in the drapery section were worn from me turning the pages, trying to decide which Bedspread to order.

I knew not to talk to strangers. My mother trusted the man we called Uncle.  He was my Uncle Carl. He gave me a five-year diary when I was born. His name  is written in my baby book. Uncle Carl is not a stranger.   My mother trusts him. I trust him. He is in my bed room.  If my Uncle is trusted to be in my bedroom then whatever he does must be okay.

I am in my bedroom with my Uncle Carl. My bedroom door is closed. He is sitting in the chair to my desk. The back of the chair is  leaning against the  door.  No one can can come in and see what he is doing. No one can go out.

The door was blocked. I wanted to open it. I saw the doorknob on the right hand side of the door.

He is my Uncle. I trust him.  I know that my mother trusts him.  He has a book he wants to show me.  It has drawings of woman wearing nightgowns and underpants. The underpants have no bottoms.  There is a big hole in the bottom of them. You can go to the bathroom without having to pull your panties down.

While I was looking at the book on his lap he opened the zipper to his pants.  He took out his penis.  I know it is called a penis because my mother told me about them. My brother has one. He can pee standing up when we go camping. When we are in the bush and there is no outside toilet, I have to squat, and the pee runs down my leg.   He took my hand and put it on the top of his penis.  I didn’t know I shouldn’t have touched him.  No one told me.

He wanted to keep the book a secret.  He wanted to show me the book again in the evening.  He told me to sleep in my brother’s room instead of with my mom. He told me to wear two piece pyjamas, and to wait for him.  He will come and get me in the middle of the night.

The chair is moved, I opened the door. I kept the secret. I slept on the outside edge of my brothers bed and I waited for him.

These writings refer to Carl Shaack, a Canadian man who died in the early 1990’s. Any resemblance to the name or likeness of any other person using the name Carl, Carl Shaack, or Uncle Carl, is purely coincidental.