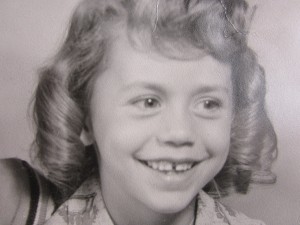 I called my mother and asked her if she remembered when I told her my secret; the secret I had promised, the man we called Uncle Carl, to keep.

She said, “I remember, you told me a few days after he left.”

I have a crisp memory of the few minutes it took to tell my mother. I have no memories of what happened after. There is only silence and the blur of ordinary days of growing up.

My mother and I were giggling under the covers of her bed. It was dark. I couldn’t see her face. There was the noise of the covers being pulled under our chins; the sound of the furnace kicking in, the sound of cars driving past on Avenue K, the sound of dust landing on the dresser.

“I can’t tell you. I promised Uncle Carl not to tell.”

“There are no secrets from Mommy.”

I told her my secret. I told her what Uncle Carl did to me behind the closed door of my bedroom.

When the words were out of my mouth; when the secret was taken out of hiding, the world stopped spinning. The furnace stopped blowing warm air. The car driving past stopped moving. The dust paused in mid-air. My mother stopped smiling  and didn’t breathe. There was silence.

There were years of silence.

I asked my mother why he left. I asked her why he didn’t stay until my father came back from Ottawa.

“We were in the kitchen and he was drying the dishes. He said, “It’s good to introduce sex, if it’s done in a gentle way, to a young child.'”

My mother told him, “If anyone touches Pamela, I’ll kill them.”

He believed her.  He packed his suitcase and left.

My mother told me I would walk into the kitchen and stare at her. It looked like something was wrong with me, or I was deep in thought. She would ask me what was wrong and I wouldn’t tell her.

I don’t remember what I was thinking.

I know what I am thinking now.
“I don’t like secrets.”

These writings refer to Carl Shaack, a Canadian man who died in the early 1990’s. Any resemblance to the name or likeness of any other person using the name Carl, Carl Shaack, or Uncle Carl, is purely coincidental.

You can read the next part of the story here.
My Mother said, ” I will kill Uncle Carl if I see him.”