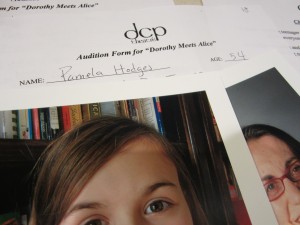 This is my year to be bold. “To go where no mother has gone before.” said boldly to the theme from the Star Trek Television show.

I always thought mothers should stay home, wash dishes, do laundry, and just drive their kids places.  Adults are suppose to age gracefully and stop dreaming; stop trying new things. Well, I don’t know where I read that. But I am not listening to that advice anymore.

Tonight I drove my daughter to DCP, Dutch Country Players, in Telford, Pennsylvania, to audition for the play, Dorothy Meets Alice.  She read for the part of the Dormouse and the Cowardly Lion.

The director was also looking for older women to read for the part of the Witch or the Red Queen. The Witch was suppose to be evil, and The Red Queen was suppose to have a quick temper. I am an older woman, and it would be fun to try something new.  I filled out the application form with my daughter, and we both read for a part.

The application asked what acting experience I had.  In high school, I was Snoopy, in You’re A Good Man Charlie Brown. In college, I had a non speaking role as a dog. I forgot to mention the character development I have done the past seventeen years I have been a mother.   My oldest daughters friends were scared of me. Was it because I had shot and skinned a bear? Or was it my firm handshake?   I also have a quick temper like the Red Queen. I won’t cut off my children’s heads if they misbehave, but I can at least pretend to cut off heads with a British accent as the Red Queen.

Today I tried something new. 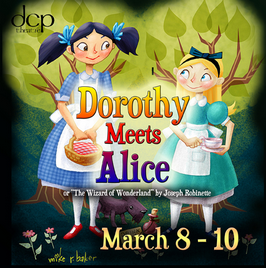 Did you try something new today?   Is there someplace you boldly want to go?