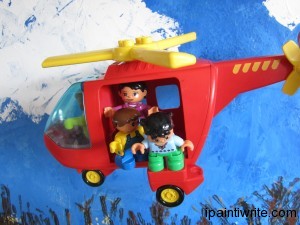 The helicopter pilot I met at The Atsugi Naval base in Atsugi, Japan in 1990, told me when he trained to be a pilot he memorized routines on how to fly if something went wrong. If something  stopped spinning he had a list of steps memorized on how to fix the problem.

If you are thousands of feet in the air, and something stops spinning, you don’t have time to pull out a manual,  search on the internet, or call a friend to find out how to fix the problem.

Most of the tests we study for at school  don’t require us to memorize the information beyond the test.  When was a battle fought, who invented sliced bread, or why is the sky blue, is not a life or death situation.

In my home I need to be prepared when something stops spinning. In the heat of the moment, when the cat has just barfed on the carpet, the milk is spilt and the children are yelling at each other, I  need to have a plan to keep my mouth from yelling. I need to have a bible verse memorized, hidden in my heart,  to keep me from sinning.

I have hidden your word in my heart that I might not sin against you. Psalm 119:11

My dear brothers, take note of this: Everyone should be quick to listen, slow to speak and slow to become angry,  for man’s anger does not bring about the righteous life that God desires. James 1:19-20

The pilot must have a plan memorized to keep his helicopter from crashing when something goes wrong.  I need to have a plan as well.

My helicopter has two floors, six rooms and a basement.  There are two pilots and three passengers.  In cargo there is one dog, four cats, two birds and one fish. I don’t want to crash. It is a life or death situation. I can wound with my words.

Thoughtless words can wound as deeply as any sword, but wisely spoken words can heal. Proverbs 12:18 (Good News Translation)

I need to be prepared. I don’t want to crash my helicopter.

Are you prepared for an emergency when something on your helicopter stops spinning?