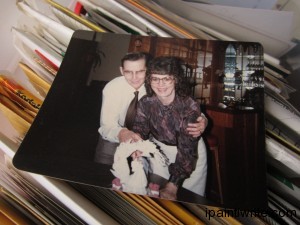 This past week while I have been looking for my glasses, my step-father was admitted to the hospital.  He had a small stroke, and was driven to the hospital in an ambulance.  My mother sat beside him during the ride. I imagine the sirens were blaring, and they got to drive through red lights.  Maybe some one driving past heard the siren and prayed for the passenger, Edwin John Bodley.

Edwin John Bodley has been alive for 86 years, 7 months and 25 days.

When they arrived at the hospital he was admitted and given a drug to break up  blood clots.  In  room 6323 at the Royal University Hospital, with three other people in the room, he told my mother, ” I love you. I appreciate all the help you have given me this past year.  Thank you for taking care of me, I love you.”

I called my mother a few minutes ago, to make sure I quoted him accurately.

“Yes, it was something like that. I can’t remember exactly.   I already knew he loved me, but it was nice to hear it.”

When my mother went to the hospital the morning after her husband had been driven to the hospital in an ambulance, Edwin John Bodley had bleeding on the brain. His eyes were closed.  He was not talking.  He has not sat up, eaten a bowl of soup, or held my mother’s hand since then. He has a feeding tube, and appears to be sleeping.

My mother said, “Good thing he told me he loved me, because I never heard from him again.”

My mother sat beside his bed, and pulled down the side rail. She leaned over and talked loudly in his ear, ” Eddie, Eddie, are you in there?  Wake up Ed.  I love you.”

Then she blew raspberries on his face. While she was doing this, she felt someone was standing behind her. She turned around and four doctors were standing there patiently waiting to see Ed. They were all smiling.

Today I will write Ed a letter. I will tell him I love him. I will ask my mother to read him the card. She will have to talk loud if he doesn’t have his hearing aids in. I think he can still hear.