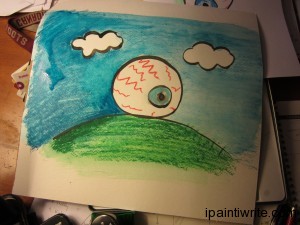 My copy of Learn How To Improve Your Memory by Robert Knightwell should arrive soon from Amazon. When the book arrives I will place it in a “Safe Spot” and then read it from cover to cover. Perhaps the glasses I was searching for will be where I put the book. Until the book arrives, I need memorizing my lines for the play I am in March 8-10th, Dorothy Meets Alice, at DCP Theatre, in Telford, Pennsylvania.

Joshua Foer in a TED talk, Feats of memory anyone can do, published on May 1oth, 2012, gave suggestions on how to memorize. He suggested using unusual images to associate with the words  to help you remember. In my lines as The Wicked Witch of the West, I say, well, but and I, often. I think of a well, and a large butt and an eyeball as big as my two-story house to help me remember how each sentence begins.

To memorize I must set aside focused time to concentrate. I keep a copy of the script in my purse, the bathroom and over the kitchen sink.  Actually a Xeroxed copy. I have not taken the original script out of the house. I have about ten copies printed of my scenes and highlighted. I don’t trust myself to take the original out of the house.

The treadmill at the gym has a small ledge to rest a magazine on. While I walk for twenty minutes in the morning, I work on memorizing my lines. I just mouth the words as I walk steadily. No one talks, they just run beside me.  The only sound is of the overhead fans. 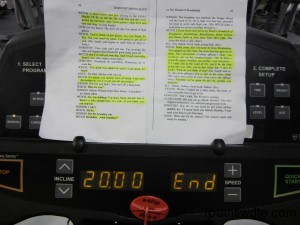 Yesterday two woman who appeared to be friends, took the two recently opened treadmills to my immediate right.  Blond pigtail, and brown pigtail.

Blond Pigtail said, “I hate taking down Christmas ornaments. Yes, I really don’t. And then he finally took them down. And I was so happy. And then we decided to just leave some of them up. And I was so glad. And I bought storage containers at …..”

She didn’t stop talking for twenty minutes. Her friend, “Brown Pigtail, only said, “I know” the entire time in reply.

Her continual talking made it hard for me to concentrate on memorizing my lines. So, I started to read my lines out loud. I wonder what Brown Pigtail told her husband?

“I was at the gym, and there was this lady and she kept saying, “Those stupid flying monkeys, over and over again.” She was so annoying, I couldn’t hear myself talk, and then I told my friend with the brown pigtail about when we took down the Christman lights, and then…”

I didn’t tell them I imagined them as two walking eyeballs, which is actually much kinder than imagining them as the first word at the start of this sentence, “But, that doesn’t seem to apply in this case.”

What do you do when you have to memorize something?