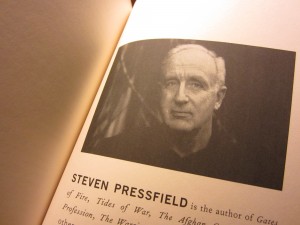 Resistance kept whispering in my ear, “Who are you, to write an email to the great author Steven Pressfield? The Pressfield who was made an honorary citizen by the city of Sparta, in Greece.  You are a peon, don’t email him, go and do laundry. Clean the litter box, don’t click send.”

There’s a secret that real writers know that wannabe writers don’t, and the secret is this: It’s not the writing part that’s hard. What is hard is sitting down to write. What keeps us from sitting down is Resistance.

Steven Pressfield, The War of Art

I battled Resistance and wrote  Mr. Pressfield.  He graciously gave me permission to quote from his book, The War of Art,  and he agreed to be interviewed.

The War of Art, by Steven Pressfield had been recommended by several authors I respect: Jeff Goins at Goinswriter, Joe Bunting at The Write Practice, and Bryan Hutchinson at Positive Writer.  I thought, “Sure, good idea, it sounds like a good book. But, it can’t be that good; it was published over ten years ago. (Keep reading to find out how you can win a free copy of Mr. Pressfield’s book.)

How foolish of me to assume that only new was worthy.

The sub-title on the cover of The War of Art intrigued me, Break Through the Blocks and Win Your Inner Creative Battles.

I often feel like I am sitting in the middle of a cement room. No, not in a straitjacket, but in a, “Crap, I can’t seem to write that story or paint that painting, sort of way.”  I want to win my inner creative battles. I want to break the blocks in my cement room and create.

I ordered the book from Amazon and started to read. The best 10 dollars and 98 cents I ever spend was for The War of Art. Don’t buy a latte for three days and buy the book.

Mr. Pressfield asked me to limit the questions I wanted to ask him to three.

I really wanted to know what he ate for breakfast. But, I didn’t want to waste one of my three questions on his choice of breakfast cereal.

1.  What is the most important weapon in your book, The War of Art,  to combat Resistance?

It’s the attitude of “turning pro.”  The second section of WOA is all about that, and, of course, so is my follow-up to WOA, “Turning Pro.”

2. After you published the book, The War of Art, did you discover another form of Resistance?

There’s one area that I only touched on lightly in WOA that, over the years, has loomed larger and larger in my conception of (and recognition of) Resistance.  That is the role that other people — particularly people close to us — play in acting as transmitters of, and mouthpieces for, Resistance.  Have you seen the movie “The Fighter,” starring Mark Wahlberg and Kay Adams?  The family dynamic depicted in that movie is a beautiful example of an entire family ganging up on the one member who shows real talent and a real passion to excel.  They all work to sabotage him, playing back to him in their words the very Resistance he is experiencing in his own head.
It’s diabolical, but I’ve seen it in real-life over and over.  The aspiring artist’s loved ones will uncannily know exactly what words-of-Resistance to say to him or her that will screw him or her up the most.  It is as if they have tapped the phone lines into his brain and can hear his own Resistance thoughts.  It’s dark stuff and really gives you a hardball view of humanity.

3. If the making of Art is a War, how do I know when I have won the battle?

You never win.  It’s not about winning.  Pursuing one’s calling or one’s art is a lifelong process.  I expect to collapse over my typewriter and be dragged out of my office feet first.  Resistance never goes away and it never diminishes.  The dragon must be slain anew every morning.  The good news is the process is its own reward.  “Success” or “recognition” or “financial remuneration” are byproducts that for many, many excellent artists never come.  That’s okay.  As Krishna said to Arjuna, “You have a right to your labor, but not to the fruit of your labor.”  Deep stuff.  Sounds daunting when viewed from the superficial get-rich-quick, what’s-in-it-for-me ambitious-and-impatient American point of view, but when you really understand it, it’s totally liberating and empowering.

After reading Mr. Pressfields answers to my questions, I am an armed soldier prepared to do battle with Resistance.
I have a plan.

.
2. Be wary of Resistance from family and friends.
3. I will not put down my weapons. I will fight the battle every day.

I will be giving away three copies of the book ,The War of Art. This is what I want you to do for a chance to win.
1. Leave a comment at the bottom of this post, and answer the question below.
2. Please share my post with your friends on Facebook or Twitter, call your mother, tell your cousin.
3. In 24 hours I will use a Random Number Generator to see who gets to read an amazing book. If you already have the book, maybe your mother would like to read it.
Are you ready to wage WAR on ART?  What form of Resistance are you fighting?

Disclosure: Some of the above links are affiliate links.

AND THE WINNERS OF THE THREE BOOKS ARE:

Wait a minute!  Before I tell you who won the books, I have to tell you something. I had planned on paying  for the books out of my personal checking account. Mr. Pressfield, the Steven Pressfield,  is sending you his book. He graciously offered to donate the books and mail them to the three winners.  Isn’t he nice?

1. Janelle Ross. She writes at My Men and Me and lives in Canada. The last I heard, her goats had eight babies.
2. May. She muses, at May’s Musings. She also lives in Canada. She likes Red River cereal.
3. Bryan Hutchinson. He writes positively at Positive Writer. He inspires, encourages and motivates his readers.