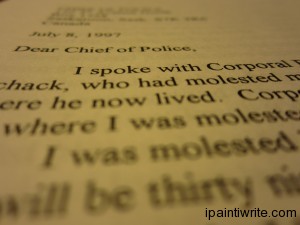 It has been months since I wrote about trying to find the man who molested me. I left you hanging at the end of a story I wrote called, My mother said, “I will kill Uncle Carl if I see him.”

I wrote a letter to The Chief of Police in Saskatoon, Saskatchewan  on July 8th, 1997. I wanted the police to find Carl Schack,  the man who had molested me when I was eight. I wanted to press charges, and take the man we called Uncle Carl to court.

A few weeks after I sent the letter to the police department, a police officer called to say they had found him. He had committed suicide.

The police officer asked me, “What do you want to do?”

I said, “Nothing.”  I couldn’t take a dead man to court. My purpose in finding him was to stop him from harming other children. He had taken care of that himself.

I don’t want to forgive him.

If he was alive, I would press charges and stand in a court of law and tell my story. I would fly to Canada and try to put him behind bars.

But, he is dead. There will be no trail. I can not tell my story in court.

The past is a place for learning from, not living in.
Carolyn S. Hennesy – Domestic Violence Speaker and Author

Trust in the Lord with all your heart
and lean not on your own understanding;
6 in all your ways submit to him,
and he will make your paths straight.[a]
Proverbs 3:5-6a

I wrote a letter to the The Police Chief in Saskatoon, Saskatchewan. I asked for a copy of my police report: file #1997-491-79. I am waiting for a reply.

Have you ever forgiven someone? Was it hard to do?

These writings refer to Carl Schack, a Canadian man who died in the early 1990’s. Any resemblance to the name or likeness of any other person using the name Carl, Carl Schack, or Uncle Carl, is purely coincidental.