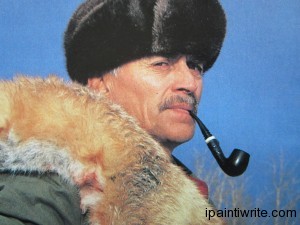 I had forgotten what day it was today. Today was just another day, one of many.  Then I read a friend’s Saint Patrick’s’ day greeting on facebook this morning, and I remembered today is March 17th. Today is the day my father died fifteen years ago.

The Saskatchewan Prairie was still covered with snow  the day my father died. Yesterday it snowed in Gilbertsville, Pennsylvania. When I look out my window as I type, I see snow on the ground, and I remember the drive to the hospital at three in the morning on March 17th, 1998.  The nurse wouldn’t tell me on the phone if my father had died.

She just said, “Come back.”

My father flew to visit me in Tokyo when I lived in an eight tatami mat apartment, in the early 80’s. I found his photograph album from his trip after he died. I didn’t know he had made an album.

When I think of my father, I don’t think of him as he lay dead on his hospital bed, his mouth open, his soul gone. I think of my father walking in deep snow checking his trap line, laughing when he told a joke, serious when he read his poetry, showing me how to skin a coyote, on the Saskatchewan river in his riverboat, walking with me in Tokyo,  looking for the first sign of spring, a crocus.

A robin came early, the spring he died, to the field in front of his hospital room.

Today I am looking for a robin.

I don’t see one yet.