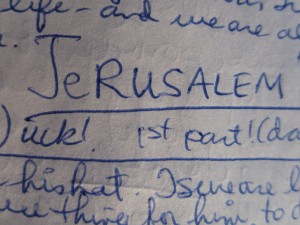 I found my journal on the bookcase last night between James Herriot’s, Dog Stories and Margaret Sidney’s, Five Little Peppers And How They Grew.  My journal begins on September 7th, 1978  in Paris, France, and ends on December 29th, 1978 in Kibbutz Reshafim, Israel. 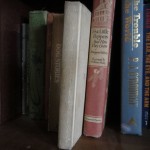 An entry from my Journal:

I saw so many things today, so much history dancing before my eyes. Or more like I walked past it, it was already there. Mount Moriah, on top of which is The Dome of The Rock.  Abraham prepares Isaac for the sacrifice on Moriah. Mohammed ascends to heaven from Rock.

Also saw Mosque of El Alsa. Actually saw a lot of stuff.  St Anne’s Church where Virgin Mary’s parents lived, saw grotto where Mary was born. Also saw The Pool of Bethesda, N.T. (John 5:2). Saw Mary’s tomb and The Grotto of Gethsemane – where Jesus would gather with his followers.

I am just listing places,nothing really has made me feel for the stone. Always buildings on top of places.

Then- to the Garden of Gethsemane. Where the passion began. Jesus decided – thought about dying. Decided to die. I even got a leaf from the olive trees there. The trees are the same ones Jesus stood by.*

It seems we followed Jesus through the day. Where he spoke, lived, where he was betrayed. Then down the Via Delorosa; the 14 stages of Jesus’ walk. The last five within The Church of the Holy Sepulchre.

I stood on The Hill of Golgotha, touched the stone. Have seen so many crosses with Jesus nailed to them.  And this time the cross was where it should have been.

Went in to see the rock where Jesus was laid after He was taken from the cross.

I touched the Rock of Golgotha at the top.

I lit two candles and kept a third.  I forgot my candle at the theater tonight, where we saw the movie Straight Time with Dustin Hoffman. I remembered I forgot the candle when I decided to write about it in here.

I forgot that I saw a movie on December 23rd, 1978. Dustin Hoffman was in the movie, he didn’t watch it with us. I don’t even remember what the movie was about.

I have never forgotten touching the Rock of Golgotha.

I came to Israel looking for Jesus.

There was a written notice above him, which read: THIS IS THE KING OF THE JEWS.

One of the criminals who hung there hurled insults at him: “Aren’t you the Messiah? Save yourself and us!”

But the other criminal rebuked him. “Don’t you fear God,” he said, “since you are under the same sentence?  We are punished justly, for we are getting what our deeds deserve. But this man has done nothing wrong.”

Then he said, “Jesus, remember me when you come into your kingdom.”

Jesus answered him, “Truly I tell you, today you will be with me in paradise.” 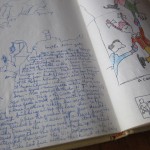 Are you looking for Jesus? Have you found him?