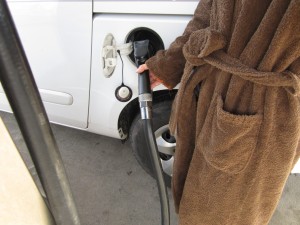 Today is pyjama day at my daughters school. Parents are the teachers, and families attend together. I help teach in the gym class during second period. We have class on Thursdays.

Last year I wore my pyjamas and a brown house coat to pyjama day.  I didn’t realize I was out of gas until I was backing out of the driveway on the way to school. If I had remembered I would have purchased gas the night before so I didn’t have to buy gas in my pyjamas.

I have a half a tank of gas so I can drive straight to school this morning.

Did they forget how to play?

I will let you know when I get home how many mothers wore pyjama’s this morning. And, I will ask the ones who didn’t wear pyjamas why they didn’t.

p.s. I grew up in Canada so I spell pyjama the British English way, not the US English way: pajamas

I just got back from school.

Five mothers wore pyjamas, thirty-six mothers did not wear pyjamas. I forgot to see how many families were sick today, so the numbers might not be completely accurate.

Almost all the younger children had pyjamas on, four out of 17 students in fifth and sixth grade had on pyjamas. Only one student in eight grade was wearing pyjamas. No one in the senior grades had pyjamas on.

I did a random survey of some of the mothers who did not wear pyjamas to school today.

Why did you not wear pyjamas today?

And the mothers who wore their pyjamas to school today were asked:

“Why did you wear pyjamas today?”

Iya said, “I didn’t forget how to play and I have a full tank of gas.”
M.E. said, ” Because it is fun.”
Michelle said, “I did it because they said to do it.”
Cheryl said, “It was fun.”
and me? Why did I wear pyjamas today? I wore pyjamas today because I don’t want to grow up.

Would you wear pyjamas to school?