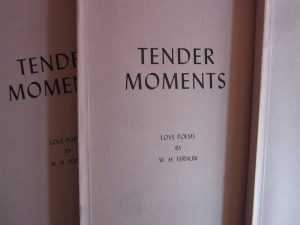 W.H. Fernuik was a Canadian Poet. He was born on January 23, 1929, in Wakaw, Saskatchewan, in a two room house with 8 brothers and sisters. He died on March 17th, 1998, in Saskatoon Saskatchewan, on the third floor of City Hospital, alone.

W.H Fernuik lived for 25,254 days. The name on his birth certificate is William Harry Fernuik. His friends called him Bill.

He self-published a book of 100 love poems Tender Moments in 1988. The poems use strong images in nature, in a simple none rhyming, free flowing form, similar to the style of his favorite Ukrainian poet, Tras Shevchenko.

Ukrainian was William’s first language; he learned to speak English at school. He was one of fourteen children, living on a small plot of land in the flat prairie’s outside of the village of Wakaw, Saskatchewan. His parents were born in the Ukraine and immigrated to Canada in the early 1900’s. There were only 21 residents when Wakaw was incorporated in 1911. There were 864 residents in Wakaw in the last census in 2006.

William married and had two children. He only spoke English to them. He wanted his children to be Canadians. He didn’t want anything from the old country.

When he lay dying from liver cancer he regretted not teaching his children to speak Ukrainian. He wanted to listen to the deep tones of his first language.

Every night after dinner he wrote poetry in his notebook. His first poems were ballads, with rhymed couplets. His later poetry was more simple, using images from nature. He ate dinner at precisely 5:00 o’clock every night with his family in the living room on TV trays. He always wanted pickles with his meals. His wife made home-made pickles.

William’s book of love poetry, Tender Moments, was self- published eight years after his divorce. The poems are not titled. They are numbered from one to one hundred.

He was part of a Poetry Writers Group that met every other Wednesday to read and criticize each others work. An anthology of their work, praire was published in April, 1973.

His poetry was published in the Wakaw Recorder and the Saskatoon Star Phoenix. Before he died he took copies of his book, Tender Moments to  bookstores and Art Galleries in Saskatoon. I don’t know how many copies he sold. 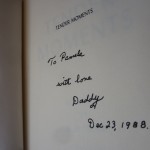