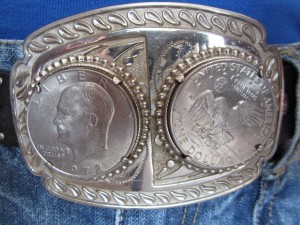 In the top drawer of Edwin John Bodley’s dresser was: a Canadian red poppy pin, a pen from The Pipefitters Union, a delegate ribbon when he was in Denver Colorado for a union  meeting in 1979, twelve obituaries cut out of the Saskatoon Star Phoenix, and a silver belt-buckle.

My mom called me to see if I wanted the belt buckle.

“I found a belt buckle in the top drawer of Ed’s dresser. Would you like to have it?”

“Silver with two silver coins on it. One coin is showing the face, and the other coin shows the back of the coin.”

Every Christmas I mailed my mother and step-father Christmas presents. They told me they didn’t need anything, but they always liked a new scarf. I gave them both scarfs.

When Ed died on April 11th, 2013, My mom cleaned out his dresser. In a dresser, neatly folded were the scarfs I had given him. The tags were still on them. A drawer of just the scarfs I had sent him.

The belt buckle my mother found was my favorite. I didn’t want to send just scarfs every year for Christmas. I can’t remember where I read that the best gift to give is something you already own and treasure. I looked on-line for famous quotes about giving. I couldn’t find any that related to giving away a prized possession.

He kept the belt buckle in his dresser drawer. He didn’t sell it.

The belt buckle came in the mail yesterday. My Mom paid 5 dollars and 53 cents to mail to me from Saskatoon, Saskatchewan, Canada. It was postmarked 2013.04.15. The package weighted .153 kilograms. It took 9 days to reach my mail box.

I will wear the belt buckle today. It reminds me of Edwin John Bodley, my step-father. I miss him. 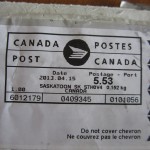