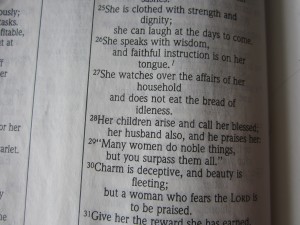 Whoever walks in integrity walks securely, but he who makes his ways crooked will be found out.
Proverbs 10:9 – King Solomon

I would like to walk with integrity. I would like to have sound moral principles and not make crooked paths. Right now I am fairly skilled at being crabby and messy.

How to be a Crabby Woman

How to be a Messy Woman

How to be a Virtuous Woman

I know I need to have integrity to be a Virtuous Woman. Amy Rees Anderson in an article in Forbes, Success Will Come and Go, But Integrity is Forever, said, “Integrity means doing the right thing at all times and in all circumstances, whether or not anyone is watching.”

King Lemuel talks about The Wife of Noble Character in Proverbs 31 in the Bible.  She gets up while it still dark, cooks and makes garments she sells. She is respected by her husband.

The woman in Proverbs 31 takes care of her family .

She watches over the affairs of her household
and does not eat the bread of idleness.
Her children arise and call her blessed;
her husband also, and he praises her:
“Many women do noble things,
but you surpass them all.”
Charm is deceptive, and beauty is fleeting;
but a woman who fears the Lord is to be praised.
Proverbs 31:27-30

Well, it looks like I have to work harder. It is time to get the roast out of the freezer and fold the laundry. And where did Martha our dog go? She needs to be brushed. It appears I have been eating the bread of idleness. Today I will eat a different kind of bread. After I pray for wisdom, that is.

Do you know how to be a virtuous woman? What bread did you eat today? 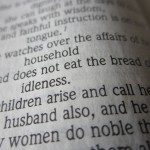 Please let me know in the comments. I could use some help.