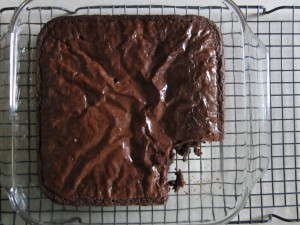 Would you like to eat a brownie? I made them myself. The brownies were made from a deluxe boxed brownie mix; Ghirardelli Chocolate Supreme for $2.89. I didn’t buy the store brand for $1.79.  The grade A brown egg that was added to the brownie mix is Farm Fresh, from cage free chickens that were vegetarian fed.    The 1/3 cup of oil I added to the brownie mix is all natural, pure canola oil with 20% Vitamin E. The 1/4 cup of water has been filtered with a high quality water carbon filter.

Would you like to eat a brownie? I just took them out of the oven. The brownies are still warm.

It is just a small piece of dog poop. Really just a tiny piece. The rest of the brownie batter is so good it compensates for the small piece that is bad.

The movie you are going to watch tonight has such a good plot line. The actors that have been cast are your favorite. The actress won an Academy Award for her performance.  The movie is set in Florence, Italy, your favorite city. All your friends saw the movie last night at midnight when it opened. You couldn’t go because you were working the late shift.

You are feeling left out. Everyone is talking about the movie. You have your ticket and you are standing in line to buy popcorn.

The movie is rated R for nudity, sexual themes and violence. Your friends told you there is a rape scene.

I will set no wicked thing before mine eyes: I hate the work of them that turn aside; it shall not cleave to me.

What are you putting in front of your eyes?

Would you eat the brownie?

Why are you watching the movie?

P.S.S.S. My daughter just said, “You should write more stories that include food.”