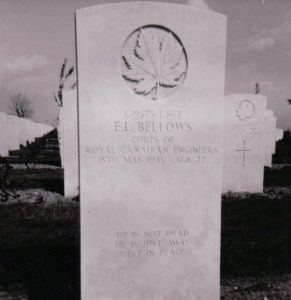 My mother remembers the last time she saw her Uncle Edward. He was home from basic training to see his family before he left to fight in  Europe  in the Second World War. He was wearing his uniform. He held her hand as they walked down main street.  He bought  her an ice-cream cone. He was twenty-five, she was nine.

Her grandparents had received a telegram saying their son Edward was coming home, the war was over.  Nazi Germany had unconditionally surrendered on May 8th, 1945, ending the war in Europe. As they waited for the return of their son, there was a knock on their door. Edward was dead.

She remembers crying at his funeral.

He gave up his seat in a truck to a friend and decided to walk instead. He liked to walk. He stepped on a land-mine. The pieces were gathered up and buried in Holland. He was killed 11 days after the war had ended in Europe.

I pray for comfort for those who were left behind.

He heals the brokenhearted and binds up their wounds.
Psalm 147:3