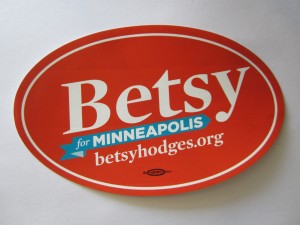 Did you notice my last name is Hodges? Are you wondering if I am related to Betsy Hodges, the woman who is running for Mayor of Minneapolis?

I am related to her. Betsy is my husband’s sister. She is my sister-in-law and my friend.

In 1975 I ran for office. I wanted to be President of my high school, Mount Royal Collegiate, in Saskatoon, Saskatchewan, Canada. My friends wore campaign buttons. My friends believed in me and they vouched for me. My friends helped me get elected. 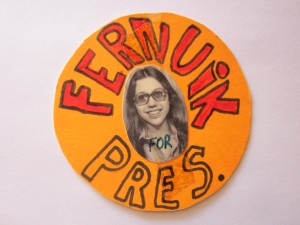 Betsy lives in Minneapolis, Minnesota. I live in Gilbertsville, Pennsylvania. I can not walk door to door in the city of Minneapolis and hand out flyers and talk to you personally.

However, I can talk to you through my writing.

I don’t like politicians. I don’t trust people who are elected into office. Except for Betsy. I trust Betsy Hodges.

An honest politician is regarded as a sort of marvel, like a calf with five legs, and the news that one has appeared is commonly received with derision.
H.L. Mencken

Why do I trust Betsy?

I trust Betsy because she has shown herself to be worthy of thrust. In the 22 years I have known Betsy, she has always followed through on what she said she would do.

If Betsy says she will do something, she will.  If Betsy makes promises to you about what she will do once she is elected she will keep her promises. 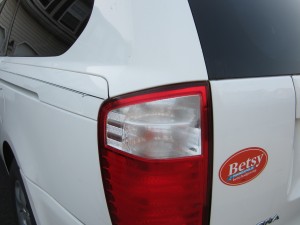 Vote for Betsy Hodges. You can trust her.

Betsy did not solicit my endorsement or offer to take me out for coffee the next time I am in Minnesota.