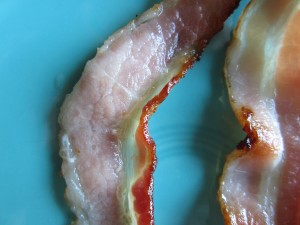 She was eating breakfast with her husband at the table next to me, at the small restaurant near my house.  They didn’t speak during the meal. She didn’t ask him to pass the salt, or ask him how his day was. The only sound I heard from them was their knives scraping against their plates.

I was drinking coffee and writing a story in my notebook.

Then the waitress brought them their bill. She had a coffee pot in one hand and their bill in the other hand.

“How was your breakfast?”

“The bacon was soggy.”

‘”I’m sorry. Here let me take it off of your bill. If you had told me when I delivered it, we could have gotten you bacon that was cooked more.”

The customer didn’t smile. Her face was bland, like soup with no salt. She said, “Bacon should be crispy.”

“I will change the bill for you.”

The husband paid and then he walked out. She followed him out of the restaurant. They did not say anything to the waitress when she said, “Please come again.”

I looked at their table. They didn’t leave a tip.

Forgiveness is the key that unlocks the door of resentment and the handcuffs of hatred. It is a power that breaks the chains of bitterness and the shackles of selfishness.
― Corrie ten Boom, Clippings from My Notebook

She held onto her resentment and didn’t forgive the chef for not cooking the bacon the way she liked it.

She let a soggy piece of bacon ruin her day.

Would you let a soggy piece of bacon ruin your day?

P.S. I went back to the restaurant a few days ago and ordered poached eggs on toast, rye bread, hash browns and bacon. I asked to have my bacon cooked crispy. It was delicious. 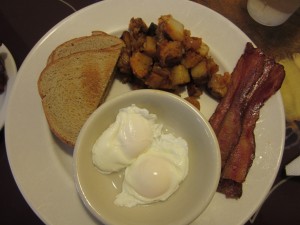