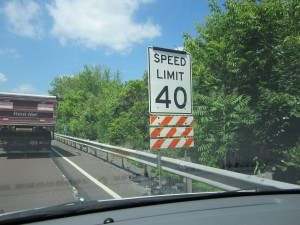 I felt like an idiot driving 40 miles per hour. The sign said SPEED LIMIT 40. However, I was the only one driving 40. Car after car passed me. Big trucks passed me. Turtles passed me. My car seemed to be crawling along.

I felt like  the only girl who wasn’t asked to dance. Everyone else was popular and dancing in the gymnasium to Hey Jude in eighth grade in 1972. I felt awkward standing alone at the back of the gymnasium.  I sat in a chair against the wall in the shadows.

I was not being cool driving the speed limit. I wanted to be cool like the other cars and stay up with them. Keep up the pace. But, they were breaking the law.

In grade eight I wanted to be friends with the “cool” girls who had parties in their basements. They invited boys to their parties. The parents stayed upstairs. The girls wore eyeshadow and mascara. They wore bras. Real bras. I wore a training bra.

They would let me be their friend. I could hang out with them if I stole something from a store. From a department store. I couldn’t just steal candy from the store down the street. I had to take the bus downtown and take something from Eaton’s. From the jewelry department.

I rode the bus and walked into the store. I walked out of the store with a bracelet in my pocket. I gave it to one of the girls that next day at school. They let me go out with them that weekend. I don’t remember whose house we went to. Maybe I would remember more if I could have seen where I was going. (Mom, did I tell you this story before?)

I didn’t wear my glasses. I thought I would be prettier if I didn’t wear them. They told me I would be. I believed them. I may have looked nicer. But I couldn’t see anything.

My focal range was just past my nose. At the end of the evening I remember putting my glasses back on when I got home. I could see again.

The speed limit was 40 mph in a construction zone. Yesterday there was a traffic accident in the construction zone. The police closed the highway as they removed the white van with its front end laying on the road. I don’t know if anyone was hurt. There were two ambulances there when I drove past.

Whoever walks with the wise becomes wise, but the companion of fools will suffer harm.
Proverbs 13:20

I will  obey the speed limit. I want to be wise. I don’t want to keep up with fools. Let them race ahead.

Do you ever feel like speeding? Do you ever want to do something you know is wrong just to be accepted?

Please let me know in the comments. I would love to chat.

Share9
Tweet
Pin
9 Shares
Previous Post: « My dishwasher is broken and I am not going to get a new one
Next Post: Life is worth living if you can laugh at spilled strawberries and whipped cream »