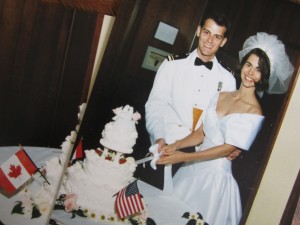 My wedding cake had two flags on it. The Canadian flag, and the flag of The United States of America.

I met my American husband, Nick, at The Atsugi Naval base in Atsugi Japan on January 26th, 1990. His ship, The USS Midway, deployed three weeks later. He called me 27 days later, from a pay phone, at his first port call, Hiroshima, on February 22nd, 1990.

At the end of August, 1990, I entered The United States of American with a fiancée visa in my Canadian passport. I don’t remember the exact day I arrived, but I remember how I felt. This was going to be my country, my new home. The United States had given me permission to enter.

I hereby declare, on oath, that I absolutely and entirely renounce and abjure all allegiance and fidelity to any foreign prince, potentate, state, or sovereignty of whom or which I have heretofore been a subject or citizen.

I thought I was ready to get a new passport, until I visited Canada last year.

When the customs agent asked me, “So, you are home for four days?,”  I started to cry. The tears helped me see I couldn’t absolutely and entirely renounce and abjure all allegiance to Canada.

Canada Day was on July 1st. My mother had to remind me about the holiday. I forgot what the holiday was for. Canada is my country of birth, but I am forgetting its history.

I have a foot in two countries.

An hour away from my house in Gilbertsville , Pennsylvania, is the Liberty Bell and Constitution Hall in Philadelphia. Valley Forge is a twenty-minute drive. I am surrounded by American History on the Eastern coast of the United States; Washington D.C.,  Gettysburg, Washington’s home.

Happy Birthday America. Thank you for welcoming me and letting me make this country my home.