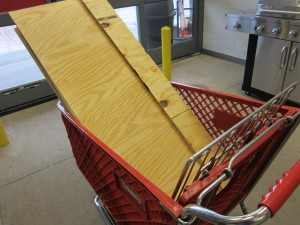 When I pushed my red cart to the check out lane, I told the salesman to call Dave in Lumber. I assumed Dave wanted to tell the cashier he had cut two sheets of 4×8 plywood for me, the customer.

“Dave said to call him in lumber, and I had two extra cuts.”

Each extra cut is 25 cents.

The woman at the check-out line at the Hardware store looked at my cart and then told the cashier in training, “You don’t have to call Dave. She has one board, and three cuts.”

The cashier in training looked through his booklet for the bar code for the plywood. He rang up one board. I could see the price on his computer screen.

The board I had cut was 8 feet by four feet. Each piece was 18 and a quarter inches. There were 10 boards in my red cart. The math didn’t add up.

In the span of one second. My brain had a little conversation with the two people who live in my head. My good nature versus my evil nature.

“She can’t do math very well. Look at all the boards in your cart. Wow, you could walk out the door with two boards and only pay for one.”

“It wouldn’t be stealing. The manager is just stupid. She didn’t call Dave in Lumber. It is her own fault. And think how many Lattes you could buy at Starbucks. It would be like free money.  Don’t tell her!  Do it! Do it!” Save your money! Lie! Go to Starbucks as soon as you leave the store!

“Shut up. My mom told me not to steal. I will tell the truth.”

He adjusted the price and I paid for two boards.

When I wrote this story, I looked on-line for quotes about stealing. Trying to find a quote from a famous person to stick in my story. And then I remembered when I took the money my mom gave me to pay the piano teacher, and I bought candy instead.

I don’t need a quote from a famous person, I can quote my mom.

I just called my mom in Canada. I woke her up. She had already walked 10,000 steps in her condo building and was taking a nap.

“Hey mom, I need a quote about stealing for my story.”

If you’re thinking about stealing, think how you would feel if someone stole from you. And God is watching.
Berdeane Bodley – my beautiful mother with the long neck

I would feel terrible if someone stole from me, and I know that God can see whatever I do.

Now off I go to Starbucks to order my Latte! (With my own money, not stolen money.)