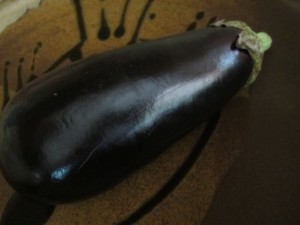 The first meal I ever served Nick Hodges was egg-plant. He asked for seconds.

We met on Friday, January 26th, 1990, at the Atsugi Naval Base Officers Club, in Japan. I almost never met him.  He came to my church, Tokyo Baptist Church that Sunday, and for dinner at my 6 tatami mat apartment, the following Tuesday.*

I fried eggplant with chunks of tomato and melted cheese for dinner.

The first portion he ate quickly.

A week after we met, I drew a picture of an engagement ring, one with a low setting so that I could put my hand in my jeans pocket, and not have the stone catch.

On May 26th, three months after we met, he gave me the ring I drew.

Two weeks later I made fried eggplant with chunks of tomato and melted cheese for dinner.

What would you eat for love?

P.S. I am serving eggplant tonight.