Don’t procrastinate, your butter will melt 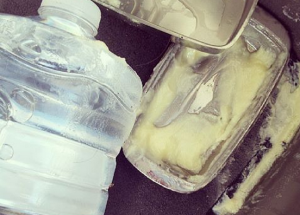 We went to friends for a pot-luck barbecue and brought potatoes and butter. When we left the dinner I put the butter container in the back of the van with the left-over potatoes.

It was late when we got home from the dinner and I didn’t want to make two trips to the car. It is so far to walk from the kitchen to the driveway. I carried in the potatoes to the house and thought, “I will get the butter later.”

The next day I bought groceries and four gallons of water. Our water filter in the fridge needs to be changed and I had not ordered the water filter yet.

“I will order the water filter later,” I thought.

I unloaded the groceries and left the water bottles in the back of the van. The water was so heavy, and it was such a long walk from the kitchen to the driveway, I didn’t want to take them into the house.

I thought, “I will take the gallons of water in later.”

Yesterday as I was driving doing errands, I could hear the gallons of water rolling around in the back of the van.

“I will get the water later,” I thought.

And then I didn’t think about the water or the butter again, until I opened up the back of the van to put groceries in it.

The water had rolled into the butter dish.

Now I have a butter mess to clean up.

“I will clean it up tomorrow.”

You may delay, but time will not.
― Benjamin Franklin

And I would add to Benjamin Franklin’s wisdom with my own quote.

You may delay, but butter will melt.
Pamela Hodges