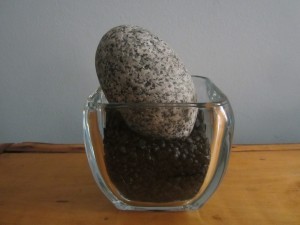 Once upon a time, there was a woman who wanted to write a book.

Every day she woke up at five in the morning so she could work on her book  before her children woke up. After she fed her four cats and cleaned the seven litter boxes, she sat down to type. She carried a large black and white rock with her.  She meant to put the large rock in her vase first.

But, alas, her e-mail and facebook messages tempted her before she even began to write her book. She knew better. She knew that she should close the tabs to her e-mail account and to facebook. But, she was foolish. She thought she could control the temptation. But the silent whispers were too distracting.

“No, thank you , maybe later. I am writing first, then I will check you. Not right now. Really, not now. I can’t. No, probably later.”

“But. There might be a good email. Today might be the day you get a prize in your e-mail. You never know when there might be something exciting.”

And she filled her small vase with black rocks.

The woman checked her e-mail, read the recent status updates of her 473 friends, and she read the story on the news web-site about the town that is building a giant rake to catch a bite-happy snapping turtle.

Several hours later, after she read her email,  facebook and the news, she had no time left to work on her book. Her children were awake and she had to cook and do the dishes and do laundry and fold and iron and help her children with their schoolwork. Life was busy.

She tried to put the large rock in the vase. But it didn’t fit.

The moral of the story

Put the big rock in first.