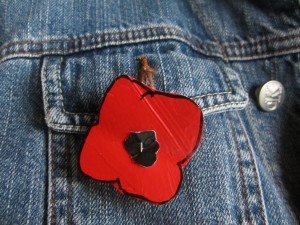 I just got back today from doing errands in Gilbertsville, Pennsylvania. No one was wearing a red poppy. A woman in the lobby at the doctor’s office was watching a video of a USO show on her phone. I could hear someone singing the American National Anthem. One of the doctor’s came over to talk to her. I thought she was going to ask her to turn off her phone; be considerate to the other people in the lobby.

She  sat down beside the woman in the lobby and said, “Thank you for playing the song. My son served in Iraq. He is home now, but I liked hearing the song.”

After I left the doctor’s office I sat in my car and cried. And I am crying as I type this.

When I was a child living in Canada, I wore a red poppy on November 11th. Everyone wore a poppy. The mailman, the teacher, the principal, the store clerk. On street corners they sold red poppies. In school we read In Flanders Fields, written by a Canadian, Lieutenant Colonel John McCrae.

In Flanders fields the poppies blow
Between the crosses, row on row,
That mark our place; and in the sky
The larks, still bravely singing, fly
Scarce heard amid the guns below.

We are the Dead. Short days ago
We lived, felt dawn, saw sunset glow,
Loved and were loved, and now we lie,
In Flanders fields.

Take up our quarrel with the foe:
To you from failing hands we throw
The torch; be yours to hold it high.
If ye break faith with us who die
We shall not sleep, though poppies grow
In Flanders fields.

Tonight when I go to my night class I will wear a red poppy. The one I just made. 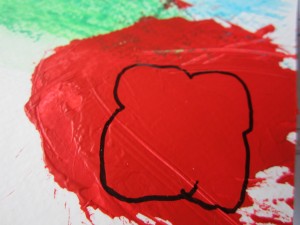 I remember those who died, and I  wear a red poppy.