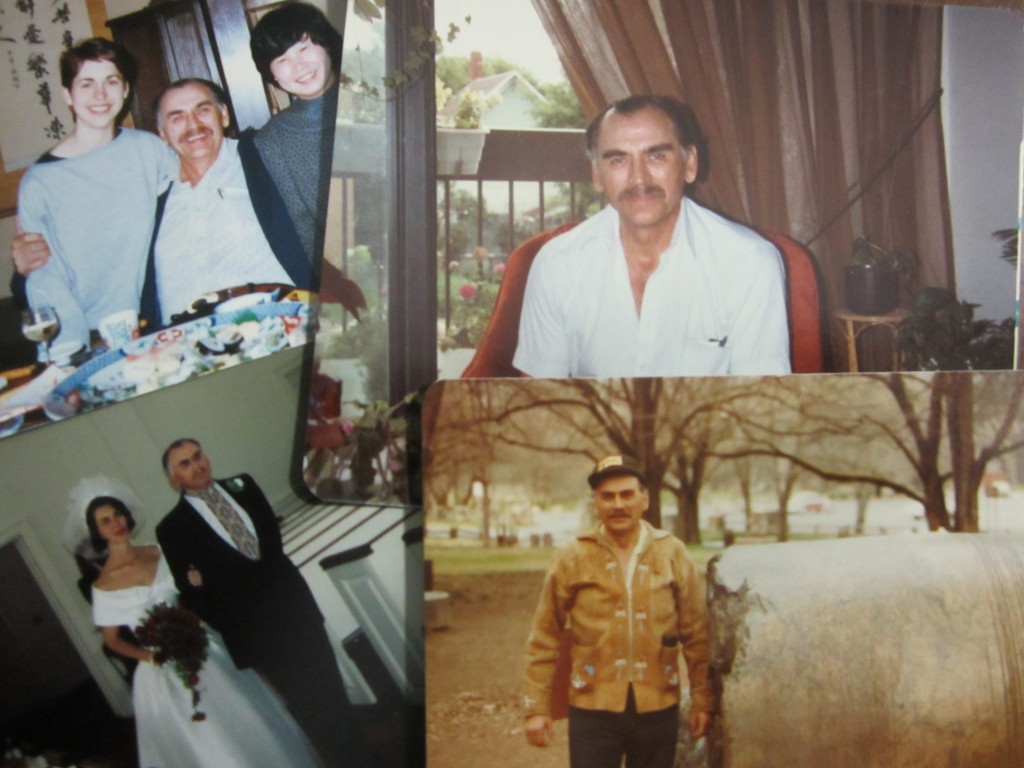 Today was spent paying bills and working on not taking any of this years mess into next year. And the Christmas Tree lights were left on all day.

And today I didn’t write or think. I just did.

I wrote our credit card number from our Health Savings Account onto pieces of paper and then stuck them into envelopes and put forever stamps on them and free return address labels from some company who wanted us to give them money.

And the day is almost over. It is 10:42 at night. My daughter and I watched a Christmas movie and ate popcorn. I only saw half of the movie because I fell asleep.

And late at night I wonder why I am sad.

I wonder why two days before Christmas I don’t feel joy thinking about Christmas being in two more sleeps.

And then I remember.

He was dying. He asked my brother and I to come home. We both came back to Saskatoon, Saskatchewan, Canada. My brother drove from Edmonton with his wife and two children. My husband and I, with our three-year old daughter, flew  from Illinois.

We wouldn’t have come if he wasn’t dying. We paid for our flights with a credit card, and kept paying years after he died the following March.

And when I think of him that last Christmas the only memory I have is of him sitting on the living room sofa in his black, long sleeve, cotton shirt with the white buttons that was too big on his shrinking frame, and his black pants with the belt buckle he made out of an antler, as he opened the white scarf I made for him on my small metal Leclerc loom. He wrapped the scarf around his neck and said thank-you.

I remember the pink high chair he made for me when I was four, that is in the basement where I live now. And I remember how he taught me to always made sure the gun was empty when someone handed it to you. And how when he handed me my gun when we were deer hunting, he laughed when I checked to see if the gun was empty. Of course he would never hand me a loaded weapon, but a rule is a rule even if it is your father handing you a gun.

And I remember how he walked me down the aisle when I got married and he sat in the same room with my mother and her new husband and didn’t say anything.

And I remember when he died in March in 1998 and he knew I was pregnant with my son and he wanted us to name the baby William after him. Between Christmas and him dying  a baby was conceived in Illinois. And I remember it was cold in Canada in Saskatchewan when my father was dying, and he didn’t get to see the ice thaw on the Saskatchewan River.  And I remember the snow crunching under my boots when I walked from the parking lot at the hospital into the main lobby.

And I remember his funeral and the people who came and loved my father.

So two days before Christmas I remember the tree my father hung in our basement on Avenue K, when I hadn’t learned how to read yet, and my brother and I pretended it was Christmas and wrapped  our toys in my doll blankets and placed them under the frozen tree that was trying to thaw while our parents wrapped presents in the kitchen.

And I remember the following summer after my father died when my daughter  bought a blue helium balloon and tied a message  to her Grandfather to it and released it into a vivid blue sky with white clouds because the balloon would get to heaven and her Grandfather would know that she missed him.

And tonight if the party supply store was still open I would go and buy a blue helium balloon and tie a string to it and release it into the black of night with a note tied to it that said, “I miss you Daddy, Merry Christmas.”

Is there someone in heaven you would send a balloon to? Please tell me in the comments. I don’t want to cry alone.