I Almost Never Met Him 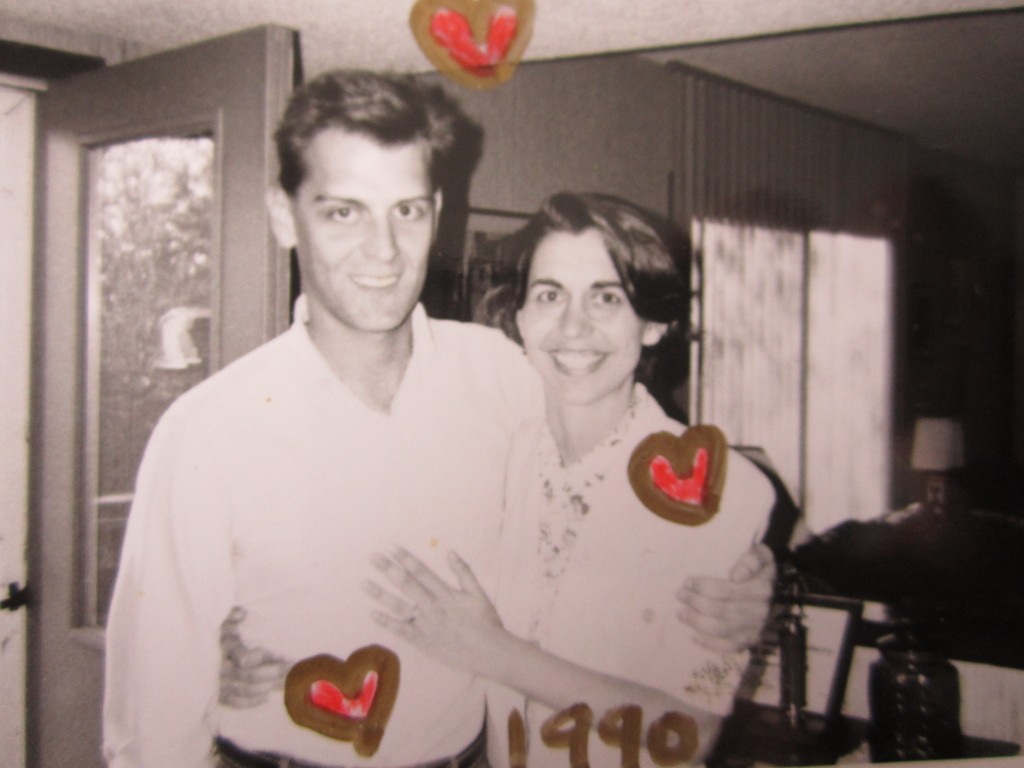 It is 9:17 at night. I just finished washing the dishes, but I am not going to wash the pot I burnt the broccoli in, it can wait until morning.

I looked at the time and date on the bottom of my screen and saw that today is January 26th.

Oh my stars! Today is the day I met my husband!

If I hadn’t gone to the Atusugi Officer’s Club on January 26th, 1990  I would never have met John Nicholson Hodges, and I wouldn’t be Pamela Fernuik Hodges and there would be no Hodges children and no dog named Martha to snore all night, and no Pooh, or Nepeta, or Jr or Charlie cat to eat grass and barf on the carpet and no seven litter boxes to clean.

I met my husband  on a Friday night.  He was standing by the counter of the bar paying for a newspaper. He had on a jean jacket with a small tear in the back and large wire rimmed glasses. He tells the story that he was on the way to see the movie, “Parenthood”, but when he saw three single American women walk in, he decided to stay. The only women that were usually there were the wives of officers.

When we walked in the first thing he looked at was our left hands.

My husband is sitting at his computer getting ready to leave for work as I write this.

“Because you were the most beautiful.”

I had been seeing a Christian Counselor in Tokyo for several months before I met Nick; trying to learn how to take care of myself, set boundaries, learn how to trust people.

A gentleman from church had taken me out to dinner, Fat Stanley with a heart murmur. Every Sunday after the dinner date,  he would say,”Great to see you. I will call. We have to get together again soon”. Rebecca, who was teaching me about Jesus at the Donut store at seven in the morning once a week, heard my stories. Stanley this, Stanley that, Stanley said, then  I said, then he said. Waiting for Stanley to call . Rebecca took me for lunch mid-week, and told me with hesitation, “Pamela, Stanley leaves messages on my answering machine every day  asking her to out to dinner.”

She was a bridesmaid at my wedding to thin Nick.

After the luncheon with Rebecca I began to see a counselor, I paid  for someone to listen to me, help me judge character. I called the counselor for advice when I was asked to the Officers Club. I was supposed to go to a Bible study that Friday. I called the woman who was hosting the study and said I was not coming. I was invited to a party at the Atsugi Base Officers Club. She counseled me not to go,

“You are never going to meet anyone you would want to marry at a bar.”

She was a bridesmaid at my wedding to the man I met that Friday. I went to the bar. It was a two and a half hour train ride from Tokyo. I was invited by Melissa. I had just met her that week. She was a first time visitor to my church and I invited her to join my group of friends for lunch at Tony Roma’s for ribs.

Nick shadowed me all evening as I spoke to helicopter pilots, submarine men and naval aviators. He would appear at my side and gently touch my elbow and ask if I wanted anything to drink. He said I was drinking White Russians. I remember that it was just coke. The skippers wife introduced herself to me and gave me a thoughtful unsolicited reference for Nick. Wanting me to feel confident that he was a fine upstanding officer. If she had a daughter living in Japan, she would want someone to look out for her.  I wonder what she would have said about the helicopter pilot. He told me my job as a photographer was easy. All I had to do was push a button.

A group of Melissa’s friends from the base were going to the dining room next to the bar. I asked Nick to join us.  When we walked into the dining room, Nick shouted,
“I get to sit next to Pamela.”  I ordered a BLT with onion and a slice of processed cheese. When we had finished dinner and were walking out to pay, Nick placed his hand on the small of my back  gently guiding me out of the dining room. He paid for my meal.

We returned to the Officers Club. There were fewer people, and some were dancing. I wanted to dance. The week before I  met Nick I decided that I would not be as forward when I met a man. I had my own business, and was  not shy to introduce myself to someone.  I would walk up to a complete stranger at a business dinner, hand them my business card and ask if we could get together. After Fat Stanley’s fake promise to call, I wanted to step back and see who would step forward.

“I sure do like to dance. This is a great song.”  He asked me to dance to Ritchie Valens, La Bamba.  Our first dance. Me in a long flared skirt and him in the jean jacket his mother bought  him.

I wanted  to see him again. Waiting, waiting and then…

“May I have your phone number?”

I told him this morning what I was writing. I asked him if he still remembered my phone number from Japan. He did, 202-2261. He told me to look in the basement. He had kept the piece of paper I wrote it on.  On the top right corner is a map to Tokyo Baptist Church. I invited him to come Sunday. He loved Jesus, just like me.

Melissa was close friends with a family on base that we were staying with that night. They were going to drive us back to their home on the compound. Nick offered to walk me.  If I had not gone to the Atsugi Officers Club January 26th, 1990, I would not have met Nick. When he tells the story he likes to say that he picked me up in a bar. I prefer to say we met him at a party at an Officers Club.

We saw each other every day until he shipped out two weeks later on the USS Midway. I have a box of letters in the basement that contains his daily letters over the next year.

He was a little hesitant to marry me after I completely rearranged all of his furniture when I can to visit him where he was stationed in Lemoore, California.  When we lived in Saint Paul, Minnesota after being married for about 12 years, he wrote a contract on the inside of the kitchen cabinet in magic marker; I would promise not to move the furniture for a year. It was a struggle, but I signed.

He gave me my engagement ring in a potato.  He asked me,  “Would you make french fries for me for the rest of my life? ”  It was three months to the day when he proposed.

His first idea was to ask me at his church during coffee after the service. I had already been there three days visiting from Japan. I was tired of waiting for him to ask me. So at dinner over spaghetti, I told him that if he ever wanted to ask me an important question, like making french fries for him, I would say yes. I thought maybe he was unsure of my response to important questions, so I hinted.  One the way back to his apartment he stopped at the grocery store and bought a potato. He carved our a wedge and placed the ring inside.

I left Japan with nine cubic meters of boxes packed in an international  shipping crate,  and a fiancée visa.  I had arrived seven years earlier with only a knapsack, a 35 ml camera and a stack of photographs in my portfolio.

We married on September 22, 1990 at his parents church in Wayzata, Minnesota.

Do you have a story about meeting someone special? Please tell me in the comments. I would love to know your story.

My friend Christa who writes at ChristaSterken.com asked if I would add photographs of Nick and me. “Great story but I wanted a picture of him how he looked and you, how you looked. Don’t leave me hanging.”

When I first published the story I only had a photograph of the yellow note with my phone number on it. Here you go Christa, thank you for asking.