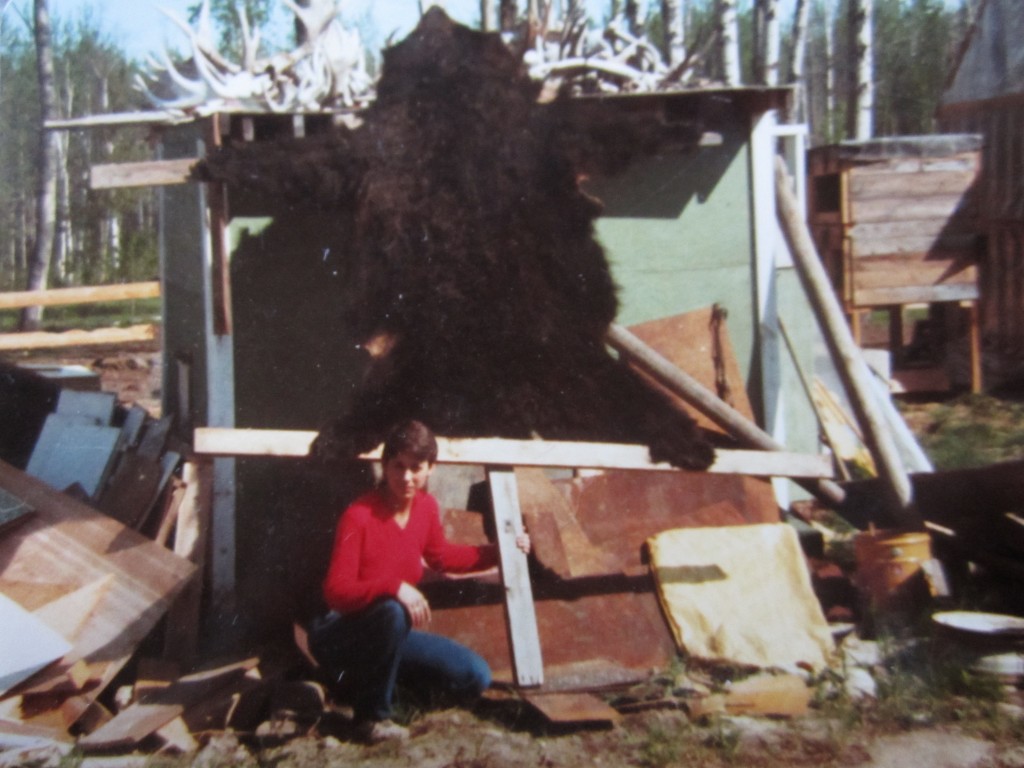 “I will fly down and help you with it.”

He flew from Saskatoon, Saskatchewan, YXE, in his two seat, Green and White Citabria airplane, to Dawson Creek, British Columbia, YDQ,  973.90 air miles, to help me flesh and stretch my bear skin, the summer of 1982. 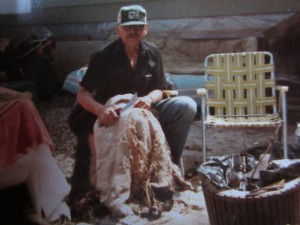 He fleshed the bear hide and stretched the bear on a large sheet of plywood. After the bear hide dried, he took the bear skin home with him, in the back of his airplane, and paid to have it tanned. He mailed the skin to me several years later when I lived in Tokyo, Japan.

The black bear came every day to the compost pile behind the dining hall at the fly in gas plant  north of Dawson’s Creek, British Columbia, Canada. The men were fed in the evening in the large dining hall. I don’t remember what time dinner was, but my Aunt was the cook, and she served it every night at the same time. I was her helper. I peeled potatoes, set the table, helped clean up, vacuumed, changed bedding, washed and dried the sheets and made the beds.

We were flown in from Dawson Creek. Two weeks in the bush, and two weeks off, a summer job  between my junior and senior year, as a photography major, at The Alberta College of Art, in Calgary, Alberta.

Often we had extra crews come in and they were housed in several small single wide trailers beside the main building. I had to walk within a few feet of the compost pile to clean the bunks.

The camp was not fenced. The bear could not be relocated. He would come back to the compost pile, an easy meal.

The bear had to be shot.

One of the men had a gun. He was going to shoot the bear.

“May I shoot the bear?” He lend me his rifle.

I stood on the back porch and shot the bear as the men of the camp were eating their dinner. I  braced myself, took a deep breath, and slowly pulled the trigger. A clean shot into the heart. One bullet to take down the bear, and another bullet to make sure it was dead. The second shot by the owner of the gun.

The black bear lay on the ground, dead. After dinner two men started to skin the bear. I came outside with my skinning knife and showed them how to skin the bear, like my father had taught me, with the Buck knife my father gave me on my birthday, the year before. A center cut down the middle of the stomach, the same way you would skin a beaver. Both bears and beavers have a lot of fat. You can not pull off the hide like a sock after you do the leg cuts, like you can on a fox or a coyote.

We put the bear hide in the freezer and I took it to my Aunt and Uncles in Dawson Creek when we flew out at the end of the two weeks.

The bear hide is on the floor beside my bed. My bare feet touch it every morning when I wake up. The claws have fallen off, and the nose fell off last week. 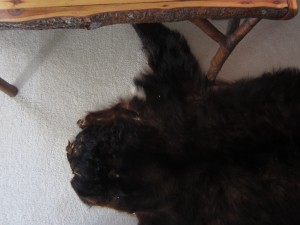 If I vase breaks I don’t save it. I will save the bear.

Today is the day my father died, sixteen years ago.

I miss you Daddy.

Thank you for reading my story. If you would like to comment you can click on the bear’s nose, or scroll to the bottom of the page. 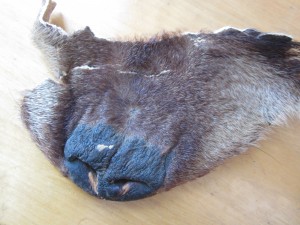