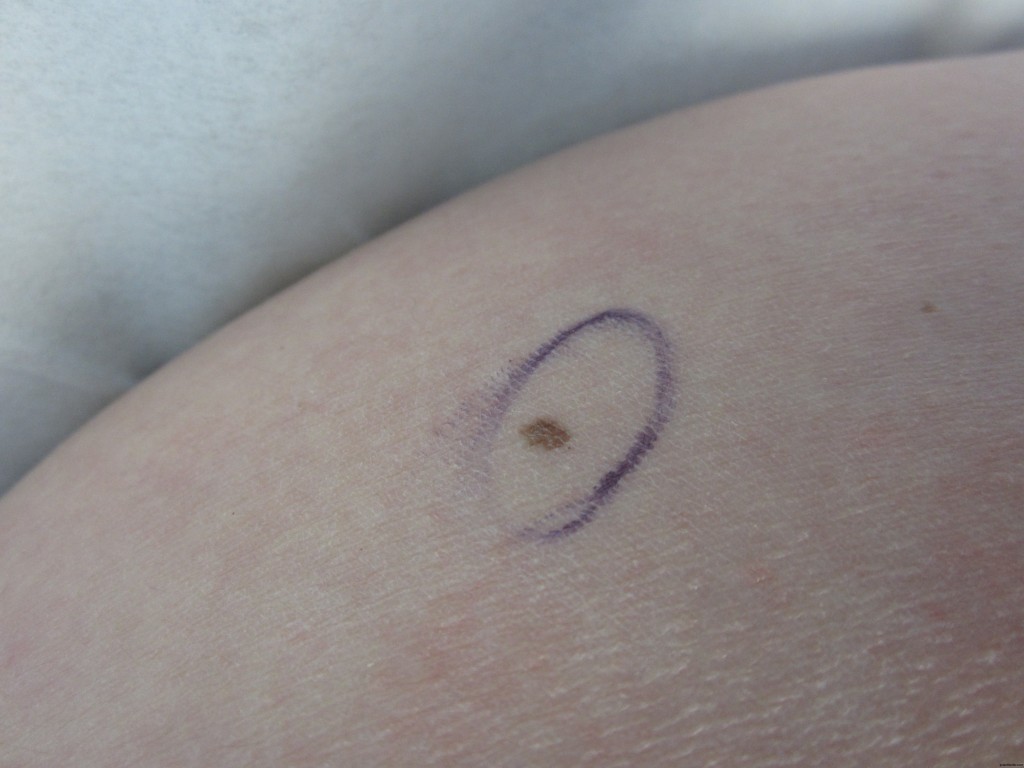 The Dermatologist looked at my skin today as I stood facing the wall in the room at the end of the hallway. All I had on were my glasses and three earrings. Two in my right ear, and one in my left.  The back wall of the room had windows which spanned the width of the room, and from the ceiling to a few feet from the floor. The view from the window was the back parking lot, the blinds were closed, twisted to let the light in and the people in the parking lot out.

The Doctor’s assistant looked at the black  outlines of a body on my chart comparing moles from my last appointment six months ago to the ones growing on my skin, as the Doctor scanned my skin with focused attention.

Two years ago in February a nurse called from the Dermatologist’s office and told me I had  Melanoma, in situ, or stage 0. The cancer was limited to the upper layer of the skin, the epidermis. It was contained. It hadn’t spread. I made an appointment for the next day and had a large piece of skin taken out by a surgeon. Sewn back together with seven stitches.

And since then, I look at my skin in the mirror every time I get out of the shower. Did any of my moles change? Was there an ugly duckling mole? A mole that looks different from the rest?

The enemy has been identified, cataloged and photographed. 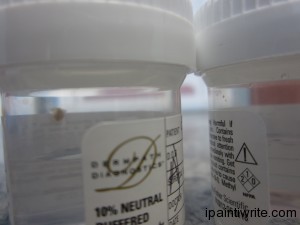 I am not worried. I am wary. Cautious. Curious. Are the two pieces of my skin soaking in 10% neutral buffered formalin cancerous?

Do the moles on your body make you suspicious?

Each letter represents an abnormal characteristic.

The Mayo Clinic has photographs of cancerous moles here.

I know you have a mole you are suspicious of. You have been looking at it for months. I know what you are thinking, because it is what I thought about the mole on the back of my leg. (It was melanoma.)  It is probably nothing. I don’t want to appear like a sissy. I don’t have to get it looked at. It is probably nothing. I don’t think you can die from skin cancer. They just slice it off like you do moldy cheese. I am fine. I will do it later.

Now is better than later with a bad mole.

If you have malignant melanoma, the cancer spreads out and down through the layers of skin. It goes through all the layers into your blood stream and into outlying areas and organs.

Skin cancer can kill you.

I didn’t mean to scare you. Well, perhaps I did want to. Scare you that is, just a little. I wanted to scare you enough to get you to call your doctor.

Why take a chance? It’s your life.

Cut off the bad mole before it spreads.

Have you  had your skin looked at lately? Please tell me in the comments. I want to encourage you to take care of yourself.

Why is number 5 the easiest one to miss?  If you don’t look at your skin regularly you won’t notice any changes.