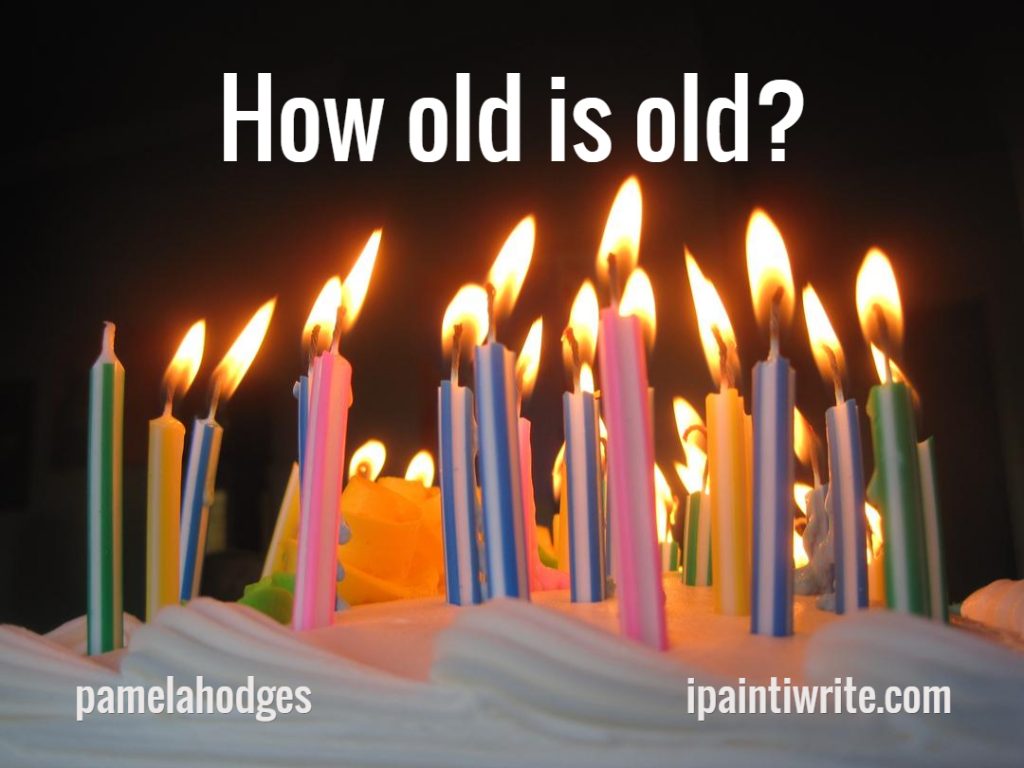 Will you please tell me how many candles are on your cake? Or is it a secret?

At what age do you stop telling how old  you are? When do you decide you are old enough?

“I am old enough, thank you very much.”

And if you really don’t want to get older what age would you choose to stop at? When your children were in diapers? When you were thirty and lived in the small apartment? Or do you stop before you add a zero?

How old is old?

To the little girl in my class, “Story Time With Mrs. Tomato,” old is when you move up to Cubbies in Awana. She said, “I am not a little girl.  I am a big girl now.”

Is old when you find your first gray hair?

My friend told me a story about her Aunt’s birthday party. She said her Aunt was turning sixty and they had a surprise party for her.

A random thought immediately flew through my brains,  Sixty, She is really old.

I don’t think about how old I am. I see my children adding candles to their cake, and my cake is covered in candles. I think I will go backwards and be thirty-four like my mother. She was only recently turned thirty-five.

Maybe old is when you have to buy more than one box of candles for your cake. 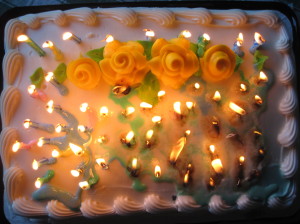 You can’t light all sixty candles before the first candles melt down to the icing. Perhaps that is old.

Old is when you can’t light all of your birthday candles without the first ones melting.

But I would rather be old than dead.

If you are not getting older, you are dead.

Each day is a gift. I am thankful for each gray hair on my head. I see every gray hair as a gift. A personal gift from an angel who kissed my head while I was sleeping.

Gray hair is a crown of splendor; it is attained in the way of righteousness.
Proverbs 16:31

May we never stop laughing.

I asked a few friends what they think old is.

Jessica said, “Old is eighty. But I know some 80-year-olds who aren’t old. And the older I get, my definition of “old” changes.”

Frank said, “Old is when you think you are old.”

Iya said, “Old is used up and unable to accomplish anything anymore. I’ve seen a few young eighty-year-olds…”

Elisse said, ” Old is being feeble of mind or body. This isn’t an age because my Grandma was young at the age of 75. It’s a mind thing. Some days I feel old at 30ish but mostly I feel young.”

Suzanne said, “Old is so subjective, there can’t be a definition. My youngest son was old at two. Old is a physical state to me. My mom just got old last year. She can’t shop as long as she used to. She can’t drive at night.”

Old is when your three-year-old tells their grandmother, “Gramma, you know you’re old and you’re going to die soon, right?”

And me? What do I think old is? Old is when you are not physically capable of getting on your hands and knees to clean your litter boxes. (I have seven.)

What do you think? How old is old? Please tell me in the comments. I would love to chat.

p.s. Here are some interesting articles on aging

What Is Old? Not 63 And Not Me, Say Aging Baby Boomers – Forbes