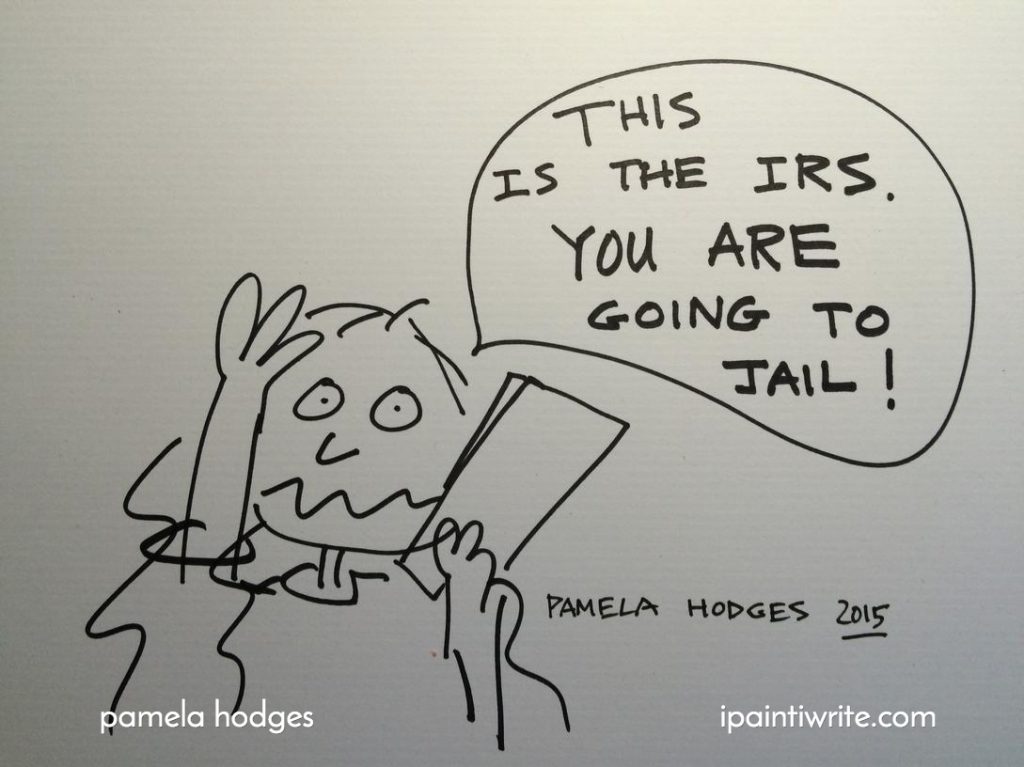 I didn’t want to write this story. I am embarrassed that I believed the person on the phone was a real IRS agent. But, hopefully, my story will help someone else keep their money in the bank.

“This is the IRS. There have been huge discrepancies in your tax filings from 2008 until 2013. Do you have a criminal attorney? In two hours the police and the sheriff will be at your door and you will be put in jail for at least seventy-two hours.”

I knew my husband shouldn’t have done our taxes himself. He made mistakes and now I have to go to jail.

My oldest daughter was sitting in the kitchen eating her breakfast. I frantically waved to her,  “The IRS is going to arrest me. Call your dad.”

The fake IRS agent gave me his name and his badge number. I was having trouble paying attention to what he said. He was speaking quickly:  legal allegations, willful fraud, huge anomalies, you will be deported, we will garnish your wages.

I can’t be deported. I am a citizen. I didn’t fraud anyone on purpose. Now I have to make sure my husband never does our taxes again by himself. I knew I was right.

The fake IRS agent said they had tried to contact us twice. He gave me specific dates and times. September 17, 2014 someone came to our home to deliver papers and we were not home. On November 10th, 2014 the USPS tried to deliver a certified letter but as there was not one to sign for it they left a slip to pick it up at the Post Office.

Maybe they did leave a paper? I should take better care of the mail when I bring it in the house. I could have misplaced a paper.

“Why didn’t you pick up the mail we sent from the post office? The package was returned to us. You had your chance to amend your taxes. Now it is too late. Here are your formal charges. It is now a legal case.”

The charges against me.

1. Violation of Federal Tax Code.
2. Theft by deception.
3. Willful misrepresentation of information to a government body.

I told him we didn’t see any note from the postal service. I asked him to send the information again. “We would never steal from the government. We are honest. My husband served in the military. We would never lie to a government official.”

“I see you are trying. You didn’t mean to be deceptive. I will give you a chance to pay, but you must pay within the next hour.”

“I can’t pay within the next hour. It would take me over an hour to get the money and drive to the IRS office in Philadelphia.”

“When did I say you had to go to an IRS office? You just have to pay with Special Tax Vouchers at a tax certified store.  The only way for me to not send the sheriff, is if you do not disconnect this call. You must stay on the line. You can not tell anyone.”

So, I got dressed and put on my boots with the IRS agent on the phone, and I drove to the bank, talking to the agent while I drove, and the phone line was open as I asked the bank teller for over six thousand dollars.

My daughter was supposed to go and see a friend, but she cancelled her plans.

“I will drive you to the bank Mom.”

The fake IRS agent said, “Your daughter can’t drive you. She might talk and tell a friend about what is going on.”

Why does the IRS scam work?

They made threats and told me I couldn’t tell anyone.

As my husband was driving home from work to help me not get arrested, he asked his phone at a red light,  “Fake IRS Scam.” and an article about Fake IRS phone calls popped up.

The Treasury Inspector General for Tax Administration (TIGTA), which oversees the IRS, has received reports of 290,000 scam calls since October 2013 and said nearly 3,000 victims have been swindled out of $14 million so far.
— From CNN Money, Fake IRS phone calls tops list of tax scams

My husband then called me oldest daughter and asked her to follow me to the bank. He knew I was about to get scammed.

YES, I was going to take $6,681.68 cents out of my bank and drive to the State Attorney General’s office and pay the money I owed so I wouldn’t have to go to jail.

You may be thinking, “Why didn’t she doubt if he was a real agent?”

I did ask him, while I was driving to the bank,  “How do I know you are a real IRS agent?”

“I will call you back from another line, and caller ID should pop up that it is the IRS.”

The fake IRS agent made me promise not to tell anyone about the special deal he was giving me, or the IRS would be flooded by people trying to pay off their back taxes and avoid jail.

Why do the Fake IRS Scammers want you to keep it a secret?

They want to keep it a secret, so your friends or the bank manager, won’t tell you, “You are being scammed.”

I walked over to another teller, and whispered to her. “Will you look up this number for me. Will you tell me if it is the IRS? And just give me a thumbs up. I have the IRS on an open line on my phone, and they can’t hear you tell me.” I handed her the paper with the phone number he called me back from.

She gave me a thumbs up. The phone number the fake IRS agent had called me from was an official IRS telephone number. ( The bad guys can redirect lines so it appears to be from someone else.)

As the bank teller handed me my money, my oldest daughter walked into the bank. She had followed me. “Here Mama, Papa wants to talk to you.”

My daughter handed me a note while I was counting the money in a private room at the bank. “Papa says that you talk to him first no matter what.”

She handed me her phone with my husband on the line, and I said, “I can’t talk to you.”

The fake IRS agent, said, “Who are you talking to. You can’t talk to anyone. We don’t have time to have your husband come home. You need to go and pay now.”

I was sitting in my car in the bank parking lot with my phone in my right hand talking to the fake IRS agent, and my daughters phone in my left hand with my husband on the line. I could hear my husband say, “Go to the accountants’ office.”

My daughter said, “Papa says to drive to the accountants office.”

And the fake IRS agent telling me, “No, don’t drive to the accountants office. Go and send the money now. Or we will send an IRS agent to your house right now.”

And I said to the fake IRS agent, “Why are you being so mean? I have to talk to my accountant. Fine, just go ahead and arrest me.”

“I am sending an IRS agent now.”

“No, don’t send him now. Send him when my husband is home.”

“You are obviously upset. We will send an IRS agent at five o’clock.”

And then, I finally hung up.

I drove to the accountants office and told them, “I just got a phone call from the IRS. They said they are going to arrest me.”

“It is a scam,” the accountant’s assistant said.

A friend in the accountants office gave me an article warning about the fake IRS scam.

My husband and I drove back to the bank and deposited the money. I showed the article to the bank manager. And I told them to watch for customers who are withdrawing large amounts of cash.

I know you are not an idiot

I know you would never be scammed.

One of my friends, Katina, told me,  “Two friends of mine almost lost a sizable amount of money. Twice we had those calls but I hang up on them and called my book-keeper. He said they are scamming people. The IRS would never call. They send letters. The next day the scammers called my son and my husbands’ brother…same last name…same neighborhood. I did not even think to share because I always think everyone knows everything and I have nothing to contribute.”

What the IRS will never do

Why am I telling you I was an idiot

On Saturday I deposited a paycheck at another bank.  I asked the teller, “Have you heard about the IRS scam?”

“They call people and pretend they are the IRS. In the last year they have defrauded people out of over $13 million dollars.

“That is just from people who are stupid and give their social security number over the phone.”

I didn’t tell her I almost got scammed. I was too embarrassed. I didn’t want to be one of those stupid people.

Please tell your friends, mention the scam to your neighbor who lives alone, maybe they don’t watch the news. Perhaps they haven’t heard about the scam.

If you have received a phone call from the fake IRS or if you have been scammed. You can fill out a IRS Impersonation Scam Report at TIGTA, Treasury Inspector General for Tax Administration.

Have you ever been scammed?

Please tell your friends about the fake IRS scam. Maybe you can help someone keep their money in the bank.

p.s. The IRS did not come to our house at five o-clock. But, you already knew that, didn’t you?