My ponytail is sitting on my desk in a ziplock bag. It is no longer attached to my head. Soon I will put it in a padded envelope and mail it to Locks of Love, or some other place that makes wigs for children. And wigs for seniors. There are a few gray hairs in the ponytail. 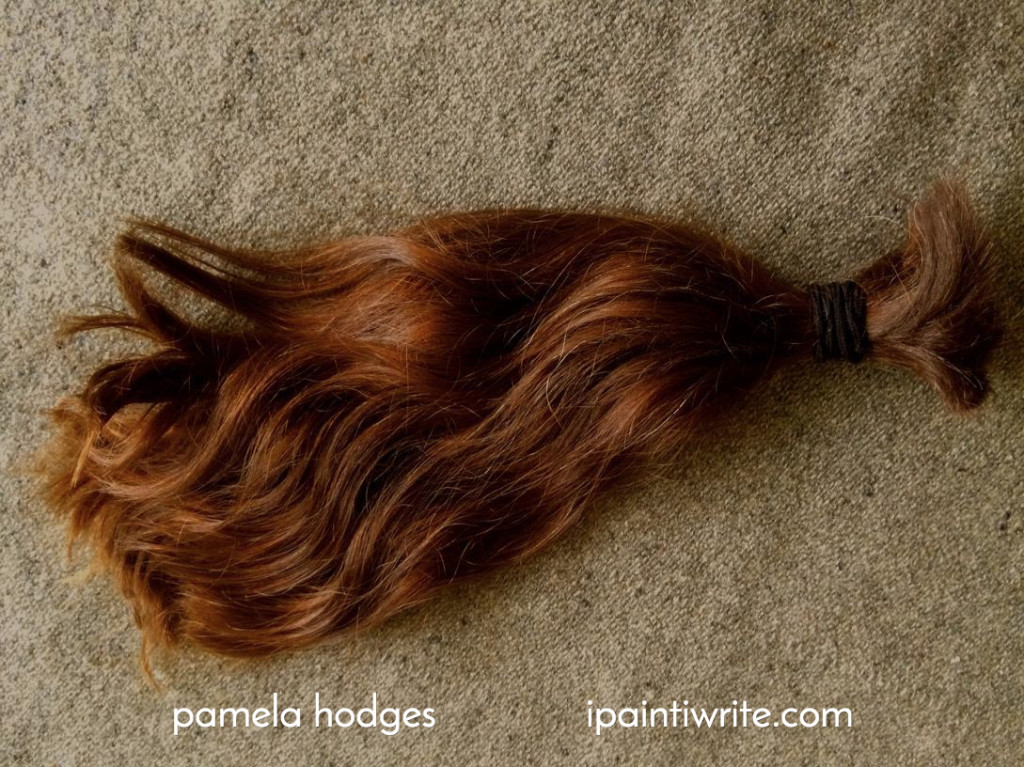 I meant to mail it sooner, but, I haven’t done it yet. Sometimes just making sure the kids have clean underwear and we don’t run out of toilet paper is all I can get done in a day. Let alone a trip to the post office. But, I will go at the end of this week. I exaggerated a little, as I do more than wash underwear and buy toilet paper. I also clean seven litter boxes and cook chicken soup.

My hair was all one length. I pulled it back in a ponytail at the base of my neck and cut it off with my sewing scissors about an inch below the hair elastic. One of those critical moments where you are about to make a decision, and if you go forward you can’t go backwards. And then the scissors start to close, and  you are all in. Fully committed. Fully committed to short hair. Fully committed to cutting off a twelve-inch ponytail.

Acting on instinct, acting without thinking.

So what makes an action impulsive? If you only think about it for one minute? What about if you had been thinking about an action for months but couldn’t bring yourself to do it. And then you just decided it was time. And you ran upstairs and grabbed the sewing scissors and then walked over to a mirror and cut off your hair? (But don’t run to the mirror with the scissors. Never run with scissors in your hand.)

Now this is usually the part in my story where I try to find quotes by famous people to support my idea that being impulsive is a good thing. Like a Good Thing in a Martha Stewart magazine.   However, I didn’t find any quotes that said being impulsive was a good idea.

Then I thought I shouldn’t include talking about being impulsive in my story. Because everything I read said being impulsive was bad. “Oh, she was so impulsive.” Like in a tone of voice that a teacher would use describing a naughty student. As though she had a major character flaw. And why would I want to advocate for being impulsive when I have no famous quotes to support my argument?

I found a quote telling me to not be impulsive. One of many I read.

Don’t be blurred by impulse

“Don’t be blurred by impulse, to avoid regrets, refrain from doing things that will make you regret.”

So who do you want to believe? Michael Bassey Johnson, a Poet, Playwright, Novelist, Aphorist, Satirist, caricaturist and a Newspaper columnist who has 298 quotes on Goodreads, or me, who just cut off her ponytail by herself?

Be blurred by impulse

I say, “Be blurred by impulse, to avoid regrets, do the things that you will regret not doing.”

― Pamela Berdeane Fernuik Hodges (Do I look more official when I use all of my names?)

Sign up for that art class, buy a ticket to Rome, call up an old friend, dye your hair green, get rid of all your National Geographic magazines from 1967 and build that Tiny House.

Acting without thinking, is really thinking. Sort of like the book by Malcolm Gladwell. Blink.
In a blink of an eye, you know what you want to do. But you think too much, for too long, and then you don’t take any action.

Trust your impulses. You know what you want. You have always wanted to sign up for figure drawing at the local community college. But, you don’t do it. Because you feel self-conscious. Be brave and sign up.

And you always wanted to go to Rome. But you will wait until you retire. And then you will be like the woman I saw at the airport last November. In a wheelchair, on an oxygen tank telling me she was supposed to be travelling with her husband but he died from a heart attack and then she got sick. So she is going by herself, in a wheelchair, with an oxygen tank. Call the travel agent. Be impulsive. You have the money, you have the time. Go and see Rome.

You are not sure your mother will approve of your green hair. But you are forty-two years old and your mother is sixty-four. Go to a beauty parlor and get green hair. Or do it yourself.

Tiny Houses have always appealed to you, but you are not sure you could actually get rid of your National Geographic magazines.

And you can grow your ponytail back out.

Have you ever cut off all of your hair?

Have you ever done something impulsive? Please tell me in the comments I would love to hear of your adventures.

p.s. For the month of March I will be writing daily slice of life stories for the Two Writing Teachers March Slice of Life Story Challenge. Slices of my life, sharing to encourage and bring laughter. You can click on the link to read other stories.

p.s.s I guess it is time to change my photograph. 🙂