My father is dead. He has been dead seventeen years, ten months and six days. Yesterday was his birthday. He was sixty-nine when he died — the same age as David Bowie and Alan Rickman. 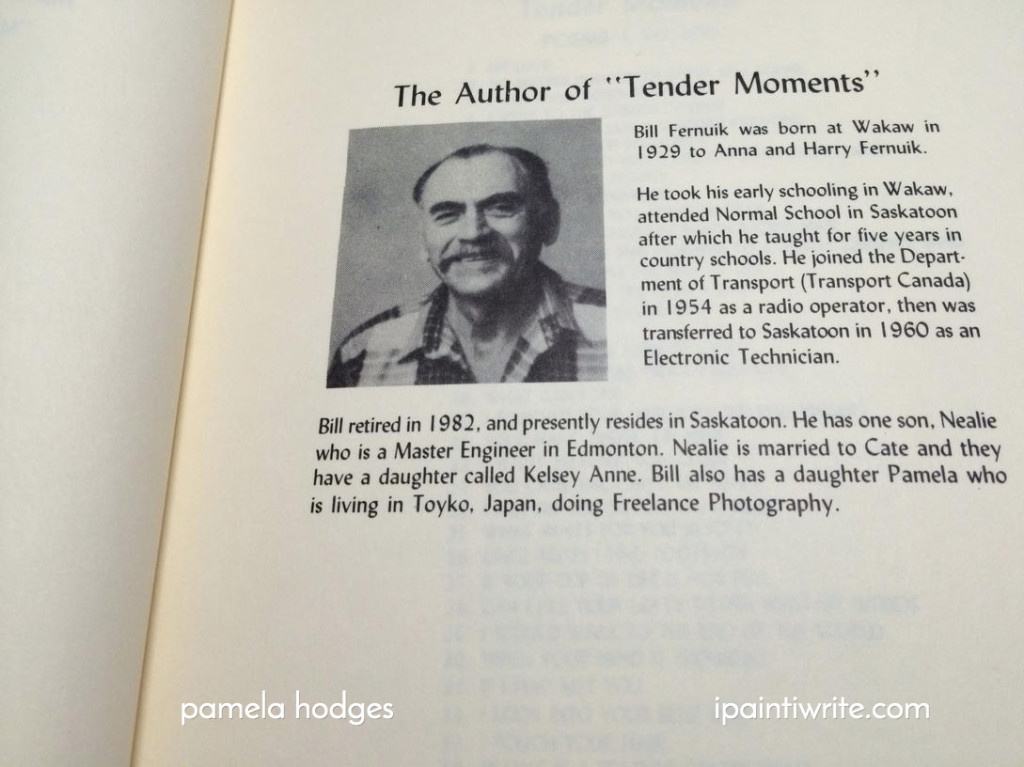 He brought his books to our wedding and gave away signed copies. I didn’t know he had given away his books at our wedding until after he died and Nancy mailed me the  books my father autographed for her. To Nancy and Dick, with care, Bill Fernuik, Sept. 22, 1990.

Nine years later, my father had a stack of his poetry books on the bedside table in his hospital room. While I was sitting with him, he addressed a book to one of his nurses, in a fancy cursive font, with a fountain pen. I don’t remember exactly what he wrote. Something about remembering to smell the roses, and thank you for your kindness. He handed the book to her as though he was handing her a golden egg from the goose Jack had stolen from the giant.

Sands of time
slipped
through our fingers
gathered
in
little dust piles
Dust came
to life
and we lived on day
at a time
Each day added
to calendar of time
too fast dust slipped
through aching fingers
Feeble fingers
try
to grasp lost sand.

I forgot people die. I forgot we are mortal.

Davie and Alan were the same age my father was when he died.

When my father died I was thirty-nine. Now I am fifty-seven. Fifty-seven is much closer to sixty-nine than thirty-nine is.

A few weeks before my father died, while he could still speak, he said, “There are two Bill Fernuik’s. One of them is going to die and one of them isn’t.  I am leaving. I am not going to die.”

But, there was  only one Bill Fernuik.  My dad couldn’t escape his cancer, or his mortality. He stayed in his hospital bed. A week later he died.

I know we don’t know when we will die. You can go to weather.com to find out how many inches of snow will fall, but you can’t go to death.com, put in your social security number, and find out what day you are going to die.

Be yourself- not your idea of what you think somebody else’s idea of yourself should be.
― Henry David Thoreau

If you keep putting off  being yourself  until tomorrow, one day you will run out of tomorrow’s.

One day you will run out of time.

The years slipped by
like water
over
a beaver dam
and at times
I tried
to stop
I pushed
I pulled
but time went on
The sun rose
the sun shone
No matter how I tried
or how I cried
the sun set.

Maybe you have always wanted to die your hair blue, but are worried what people will think. Maybe you want to go back to school and become a nurse.

Maybe you want to write children’s book but you never write because you spend all your time cleaning toilets and making sure there is no dirt in your home in case someone comes to visit, and you would be mortified if they saw dust on your baseboard’s . Your computer is never used, your paints stay in the tubes, and your keyboard is silent.

Whoever you are. I hope in all the days you have breath,  you are being you.

You’re the only one who can be you.
— Mr. Rogers

[share-quote] While you are alive, for all the days you have, be you. [/share-quote]

Are you being you?
I love hearing from you.
Please let me know how you are doing.
Reply to this email if you are a subscriber and get my stories in your in-box, or click on comments and reply to this post.