When Dorothy walked out of her church at eleven a.m. on November 21st, 1982, on Crescent Road at 1st Street North East in Calgary, Alberta, she might have been surprised to see five identical black and white photographs of mice lined up against the Calgary skyline. The mice, five feet eight inches tall, part of an environmental art project called Mice Are Nice, were an exaggeration of reality. 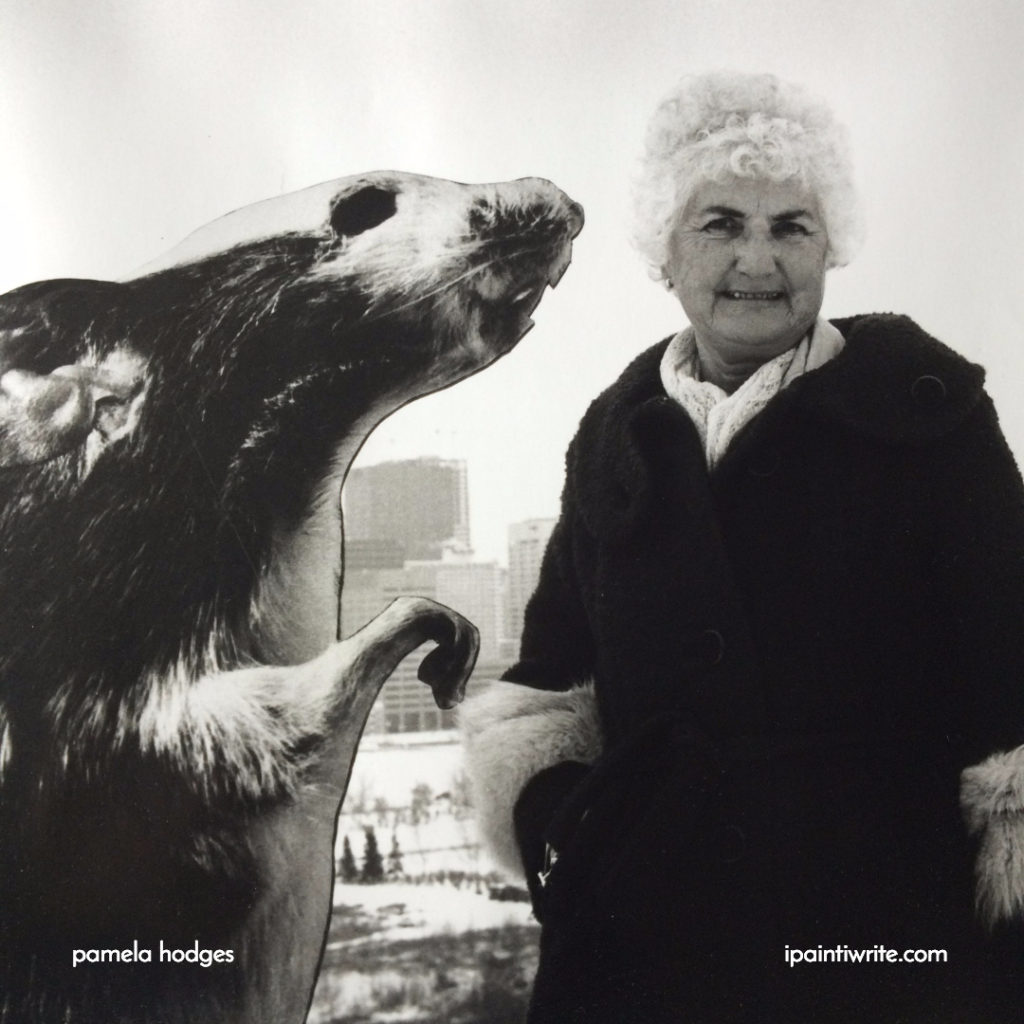 Dorothy didn’t see real mice in front of her. She saw exaggerated mice. Dorothy was the only person from the church who came over to meet the photographer. Me. Mice are Nice was my senior art project when I was a photography student at the Alberta College of Art in Calgary in 1983.

Annie Weatherwax, an artist, writer, and author of all we had,  in a June, 2016 article for Ploughshares at Emerson College, said, “The purpose of art is not to depict reality—it is to transform reality into something more interesting and meaningful. And the only way to do this is to distort, exaggerate, or in some way embellish what is there.”

Maybe Annie Weathermax was friends with my art professor from 1976? They both approach the creation of art from the same perspective.

Advice from an art professor from 1976

In 1976 I was a first-year student at the University of Saskatchewan in Saskatoon. My art professor gave an assignment to paint an ordinary object. I painted the thermostat in the hallway where I lived on Avenue K. A small gray thermostat.  The size of the thermostat in my painting was slightly larger than the real object. Slightly.

My professor told me the painting was boring. He didn’t want me to just imitate life, but to make a statement. He told me to make it huge. Be dramatic. Be bold. If I wanted to paint the object bigger, then make it really big.

The image of him holding my painting,  gesturing wildly, speaking emphatically, is a short one-second clip in my mind. His exact words are forgotten, but his challenge to create art that makes a statement remains.

I listened and made large mice. Very large mice. I made the mice for Mice are Nice, my senior art project when I was a photography student at the Alberta College of Art in Calgary in 1983.

Here is a photograph of the mice in front of the Calgary Tower at Center Street and 9th Avenue, on November 15th, 1982. 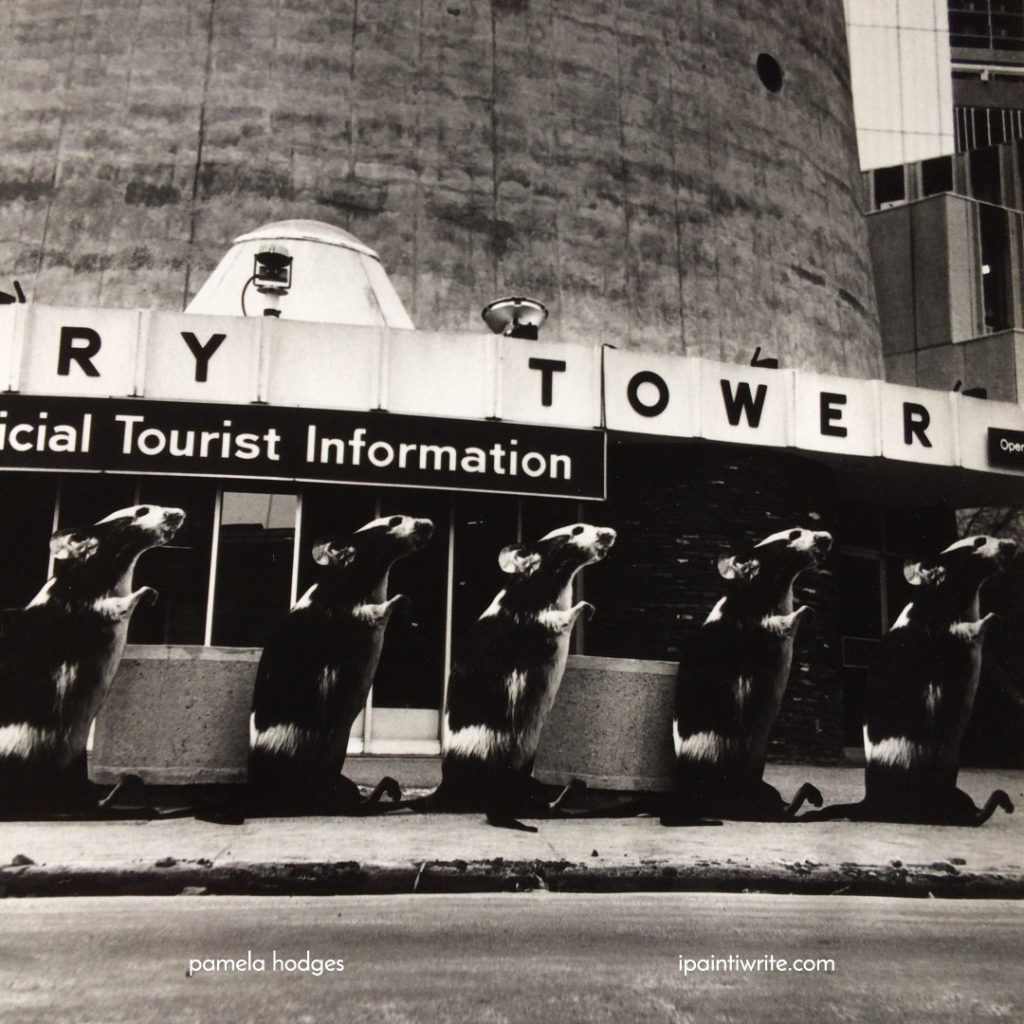 Advertisements were taken out in the local paper, The Calgary Herald, for the week before the mice started to appear, telling people that Mice Are Nice. This newspaper was from Monday, November 8th, 1982. Can you find the advertisement for the mice in the photograph of the newspaper? I still worry about Petra. 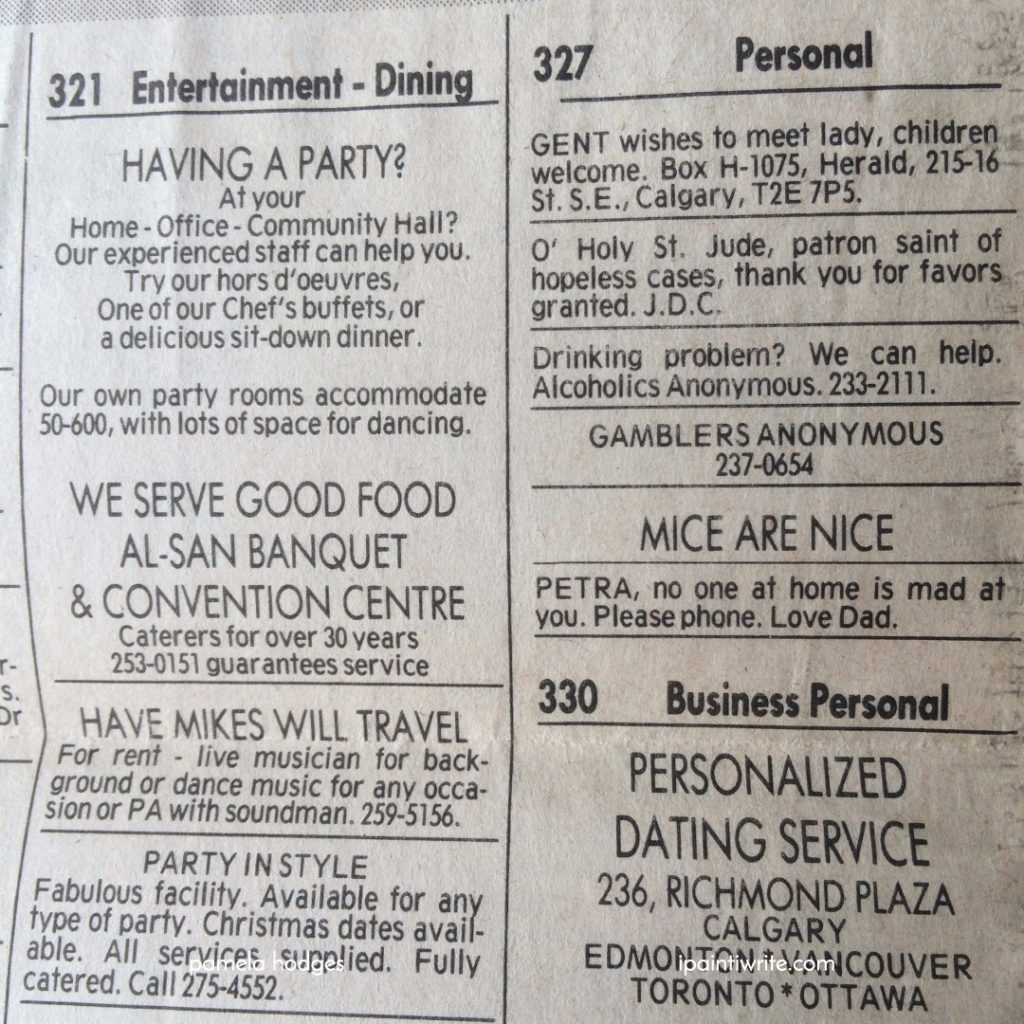 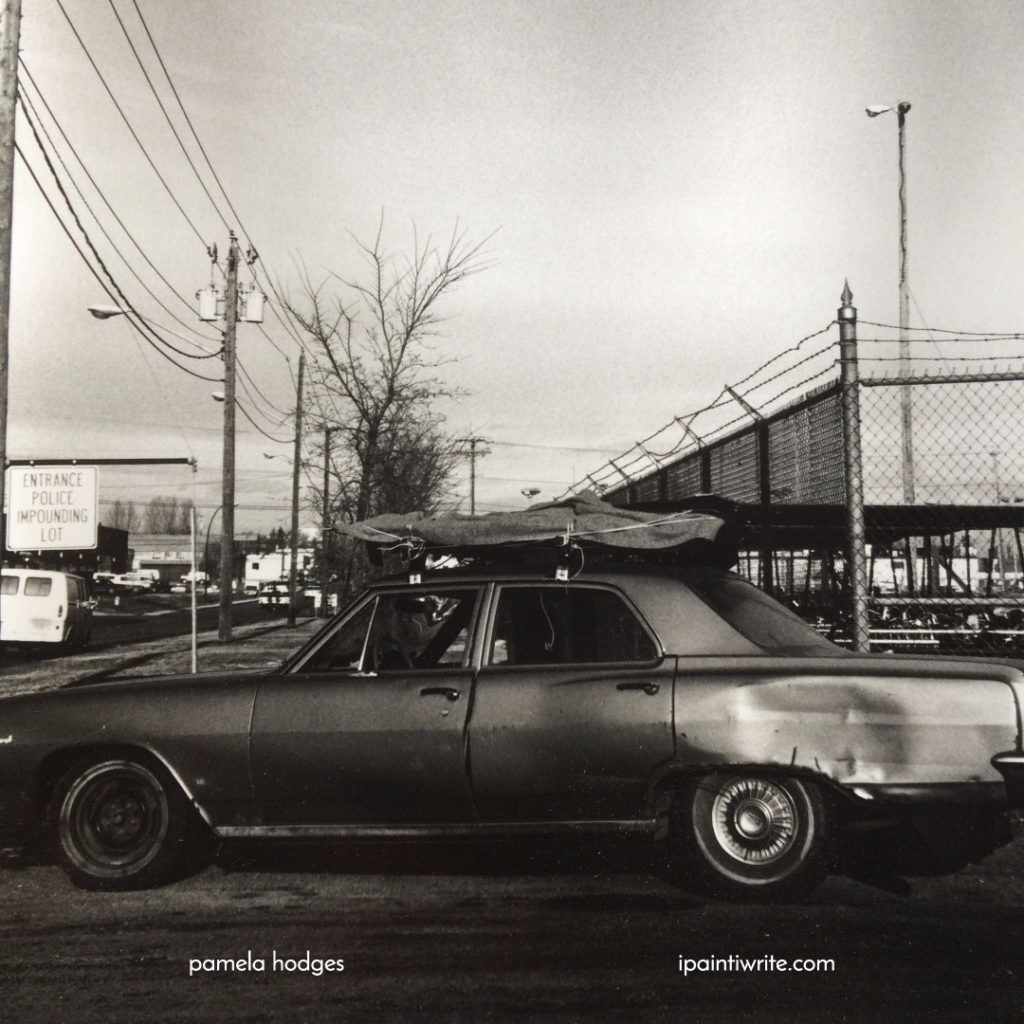 How Do You See Your World?

When you draw, or paint, you are creating how you see your world. Your interpretation of reality.

If you were in a still life class, and everyone was drawing from the same display, each drawing would be different. The differences would be because they were from a different perspective, but they would also be different because the artist interprets what they see differently.

My latest art project is enlarging the illustrations for the book my cat wrote. How To Be a Cat. I used an overhead projector to get the proportions right. The illustrations are painted on 3/4 inch plywood, cut out, and then painted with acrylic paint. 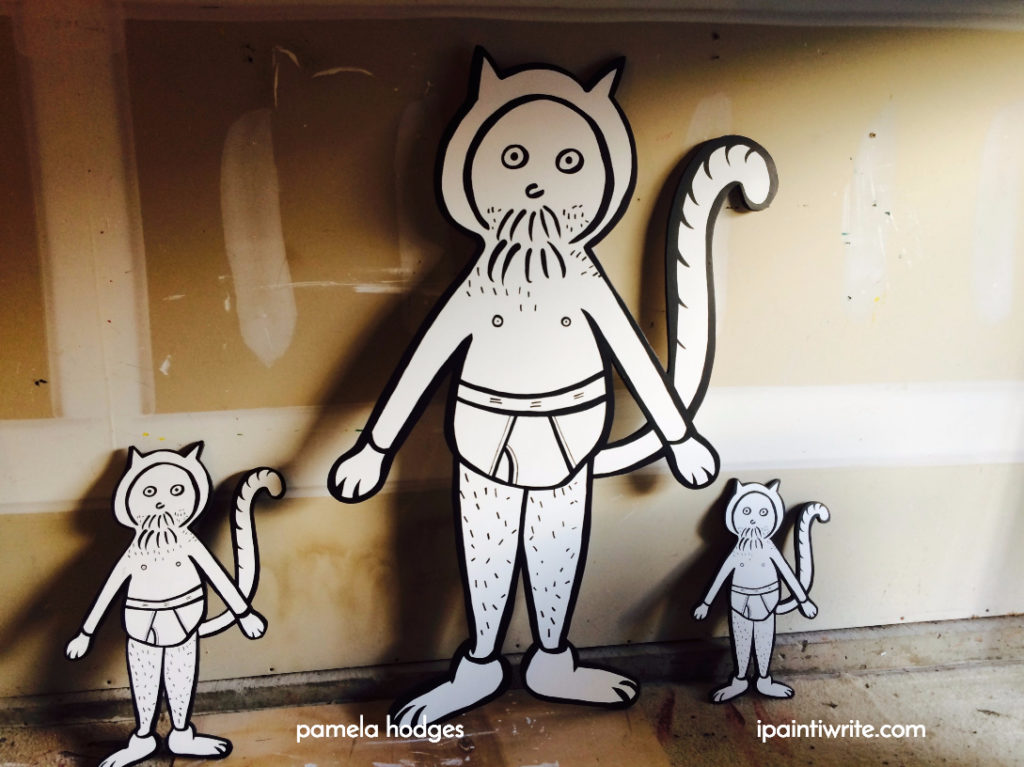 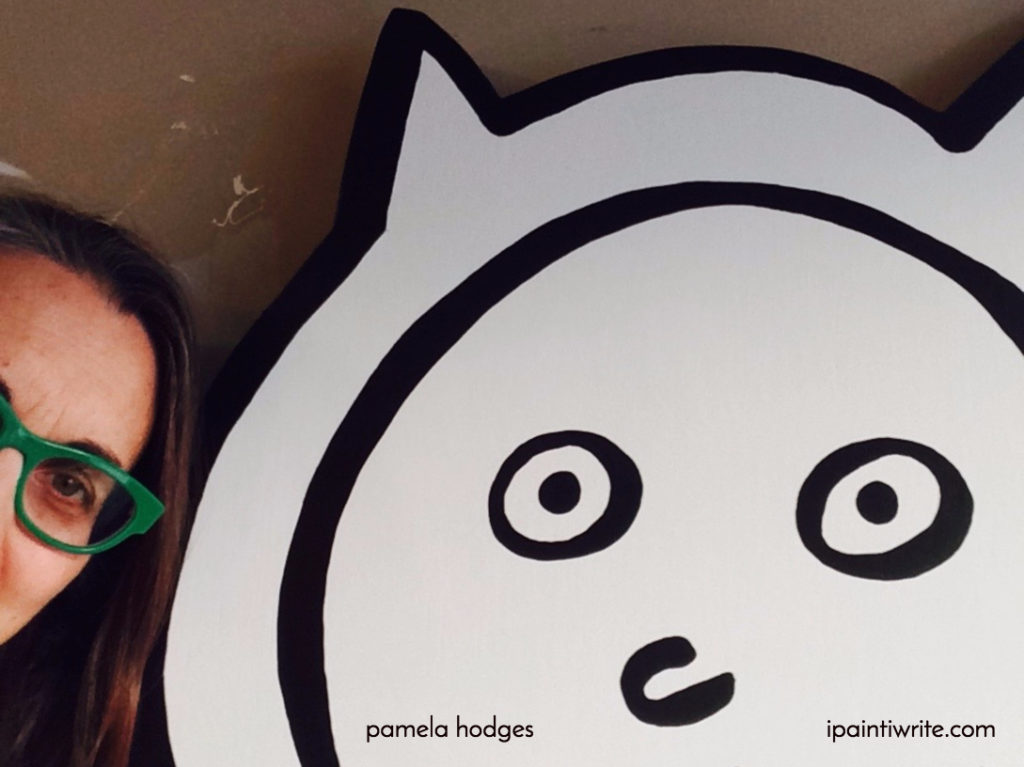 Please let me know in the comments. I love to hear from you.