In 1983, I flew on a one-way ticket to Bangkok, with a layover in Tokyo. I got off the plane at Narita Airport, took the train into Tokyo, and stayed for seven years working as a photographer. 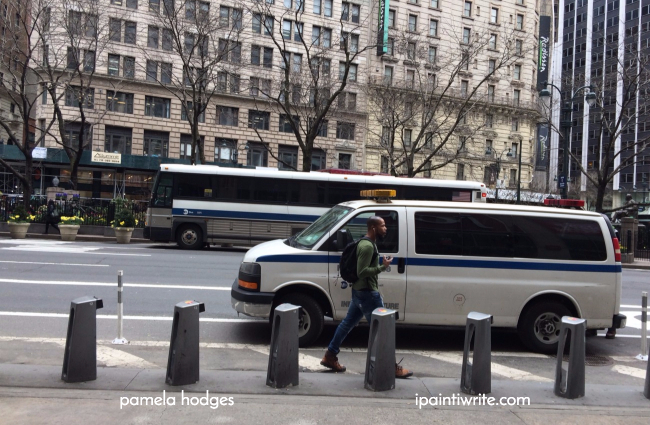 In 1978, I hitchhiked in occupied territory in the south of Israel with a woman I met weeding sugar beets in Kibbutz Reshahim.

We moved to Pennsylvania from California on November 22th, 2010, six years and four months and twenty-three days ago. New York City is only two hours away, and I had never gone. I was waiting to not be afraid. I don’t know how I planned on losing the fear, but when it happened, then I would go to New York City.

I don’t know why fear and anxiety had come to live in my mind, but it was real, as real as my six cats and seven litter boxes are real. But. I was patient. I would just wait for the anxiety to go away.

There is always tomorrow.

Last week, a friend who I hadn’t seen in sixteen years, a friend who lived 2,924 miles away, was going to be in New York City. She texted me and asked.

“Hey, Pamela — could you come into town (NYC) on Friday?”

Translation: Try means you want to meet your friend, but you are not sure if you can overcome your anxiety.

There is no try to go to New York City. There is only do. Click To Tweet

On Friday, I drove to Hoboken. Fear and anxiety rode to New Jersey with me. They stayed with me as I found a place to park, and they rode with me on the path train to the 33rd Avenue Station in New York City.

I texted my friend when I got off the train.

“Are you ready to go out? I am having a bit of anxiety. Can you come to me?” 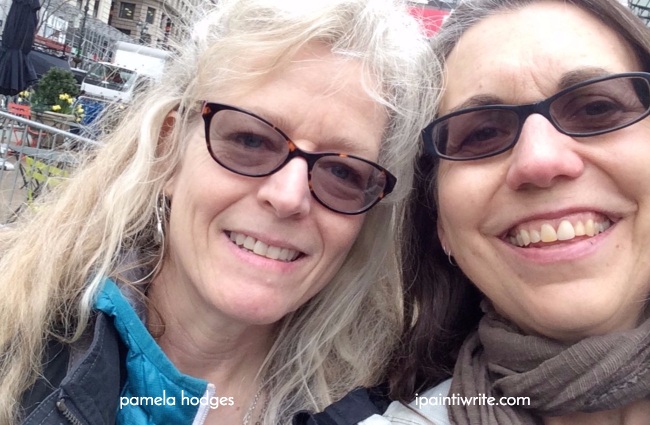 My friend took the subway to where I was standing in front of JCPenny at the corner of 34th Street and Sixth Avenue. We went to the Metropolitan Museum of Art, walked, talked and drank coffee, then I took the path train back to Hoboken and drove home.

Fear and anxiety were still with me. They were smaller and weaker. They wouldn’t keep me from going back to New York City.

Fear won’t leave on its own. The way to conquer fear is to do what you are afraid of.

Tips on How to Do Life Afraid

1. Have a compelling reason to face your fear.

If my friend hadn’t come to New York City and asked me to meet her, I would still be waiting for fear and anxiety to leave.

What do you want to do but you are afraid to try?

Sometimes the most compelling reason to face a fear, is the fear of regret. Regretting what you didn’t do.

“You may delay, but time will not.”
― Benjamin Franklin

2. Have a map or an instruction manual.

Maps also tell us where we are standing. Knowing where you are, gives you a reference point. Here and there, with the path in between.

Read a book on singing, painting, writing or baking. If your fear is lack of knowledge, learn. Take a class, watch videos, try.

This didn’t occur to me until after I was home. I could have researched and looked at maps on-line or watched videos about how to get around New York City. The more knowledge you have, the less you have to be scared of. When you can visualise a place it is no longer an unknown.

Knowledge can lessen the fear of the unknown.

If you are not sure what train to take ask someone. There are station employees who will help you find which train to take. People are kind. And you ask someone who isn’t, find someone else. When I asked the police officer what train to take to Hoboken he pointed to the train I was standing beside. Sometimes what you are looking for is right beside you.

Be vulnerable and admit you don’t know something, then ask someone who does.

5. Be Willing To Make Mistakes

If you don’t risk making mistakes you will never have a chance to stand in front of a Picasso painting at the Metropolitan Museum of Art in New York City. Thankfully we had only gone three stops in the wrong direction before we realized we weren’t heading in the direction of the museum. We got off at the next stop and got on the right train.

Be willing to sing a song out of tune. Be willing to paint a picture that looks like a cow when you wanted it to look like a dog.

If you are driving home from Hoboken and miss your exit, and accidently drive to Newark first,  trust your GPS to get you on the right road home.

Follow the path of singers, painters. and writers who have gone before you. Read their books, learn their mistakes, make your own mistakes.

What do you do when you are afraid? Or are you still waiting for the fear to go away?
I hope you are well, enjoying life and doing life afraid.