Where is my father? 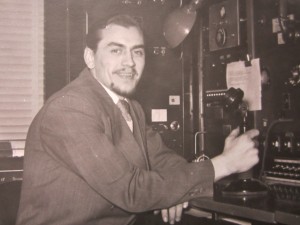 Where is my father? He died on March 17th, 1998. He was cremated and put in an urn. His wife, who is not my mother, has his ashes. After he died she took his dog to the veterinarian and had it put down, had a yard sale without telling me and my brother, sold the house he left her in the will, the house we grew up in, and moved with no forwarding address.

The last time I saw him he was dead, covered with a white sheet pulled up to his chin, in a private room in the hospital. The nurses had combed his hair straight back from his forehead, black, gray, shiny. The strands separated into rows the same width as the black plastic comb on his bedside table. I asked for a few minutes alone with him.

I kissed his forehead.

He was cold. His skin was like a layer of moist paper on top of a rock, as though it had separated from the skull. There was no breath of life in the skin. I took a pair of scissors out of my pocket and cut a strand of hair from the back of his head. I lost the piece of hair.

Where is my father?

Today is Father’s Day. I remember him.

This morning I looked through letters he had mailed me when I lived in Japan.

Daddy, I can not return to your garden. You can not hear my footsteps. This morning I will find a rose and put it behind my ear.

I miss you, Daddy. I know where you are.

You are in my heart.