Why you need to create a creative habit

Last year on February 20th, I took my measurements and my weight and drew a picture of myself. I wrote down the date a year later, with a question mark. I wondered what I would look like then. My goal was to weigh less on the scale and have smaller numbers for my measurements. Taking my measurements yesterday helped me see why we need to create a creative habit. 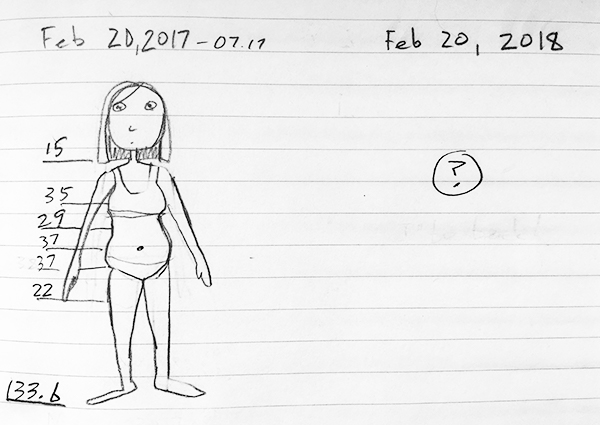 Yesterday, February 20th, I weighed myself and took my measurements. I weighed two pounds more than I did a year ago and measured almost the same everywhere except my hair. My hair is two and a ¼ inches long, where it had been fifteen inches long a year ago. I shaved my head in November.

This morning at nine, I didn’t finish cleaning the seven litter boxes, I didn’t unload the dishwasher, I didn’t fold laundry, I sat at my desk and wrote.

It is a small daily habit I am starting. Setting a time and a place to write: nine o’clock to twelve o’clock. I have the time blocked out on my calendar. Some days I forget to look at the clock and start to write after nine, but I give myself grace and sit down to write even though I am late.

When I stood on the scale to weigh myself yesterday, I realized, the scale and exercising are the same as writing a book, painting a picture, or any other creative project we are thinking about. 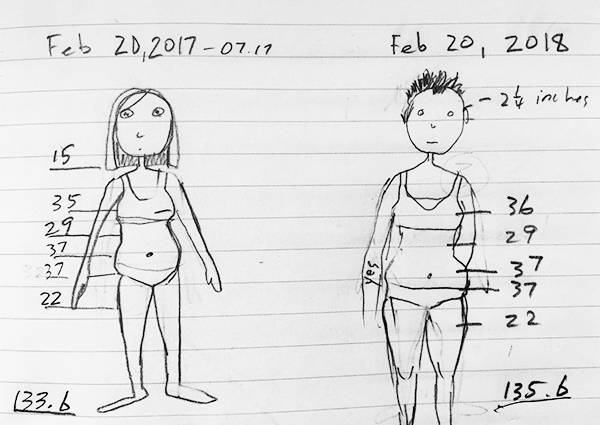 I was going to say “working on” and not “thinking about.” But I realized some of the creative projects might only be in our minds. And it is the “working” that counts.

Creativity is a habit, and the best creativity is a result of good work habits. — Twyla Tharp, The Creative Habit: Learn It and Use It for Life Click To Tweet

Why you need to create a creative habit

On page 590 of the New College Edition of The American Heritage Dictionary of the English Language, habit is described as: a constant, often unconscious inclination to perform some act, acquired through its frequent repetition.

Creating a creative habit will help you work on your creations. Twyla Tharp, a choreographer, wakes up at 5:30 A.M. every day, gets dressed and goes outside to get a cab to take her to the gym where she exercises for two hours. Twyla states in her book the importance of establishing “decisive patterns of behavior— at the beginning of the creative process, when you are most at peril of turning back, chickening out, giving up, or going the wrong way.”

My habit of sitting down at my desk every morning, during the week, at nine will help me write. I have to sit at my desk. I have to create the habit of writing.

I only write when inspiration strikes. Fortunately, it strikes at nine every morning.” — William Faulkner

What is your creative project?

Are you working on your project? Or are you thinking about what you want to create?

“We become what we repeatedly do.”
― Sean Covey,

I have to get back to my writing today, my word count is down. I took a break from my writing project, to encourage you to do the work.

I still have to schedule a time to exercise. Next year, on February 20th, 2019, I want to see a difference. And not just the hair on my head.

My copy of The Creative Habit by Twyla Tharp has thirty-six post it notes in it. It is on my list to re-read, I need help creating a creative habit. Now I have to work on habits for drawing and exercising. Cleaning the seven litter boxes is a habit, the cats remind me when I forget.

Be kind to yourself. And start creating the art you dream about. Make it real, take your ideas out of your brain and put them on paper.

p.s. I would love to hear from you. Click here to comment, or scroll to the bottom of the post if you are on the blog.