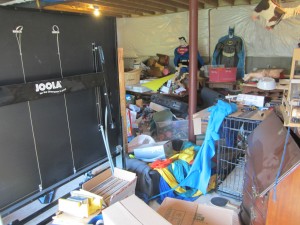 A few months ago, I told you I cleaned my basement. Yes, it was clean. All the boxes were neatly stacked in a little corner of the basement. And, I sort of bragged.

Hey, look at me, look at what I did. I told you How to deal with a problem that seems impossible. Believe you can do it. Then do it and don’t quit. 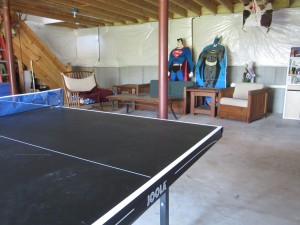 The basement did smell musty. All of the boxes I had stacked in the corner of the basement smelled like mold. The boxes had been put in an area that  had no air circulation.

The boxes were taken out of the storage area and placed beside the ping-pong table. They have been sitting there for several weeks. The clutter has spread and I don’t want to deal with the mess. AND, I really didn’t want to tell you my basement was a mess again.

But, being honest is better than pretending.

Once again the ping-pong table, Joola, is crying.

“Please, please Mrs. Hodges will you get rid of some of your things. Do you really want to keep everything you have every made? Wouldn’t you rather create new things and play ping-pong?”

“Yes, yes, Joola, I would like to play ping-pong and create new things.”

“Perhaps you should read your own story. Just believe you can do it and do it.”

Joola is getting a bit snarky. Perhaps I should sell her.

So, it appears that cleaning the basement is not a one time deal. It appears  bad habits need to be dealt with more than once.

Ann of Avonlea is right. It is a very bad habit to put off disagreeable things.

An argument between Bad Habit’s and  Good Habit’s.

1. Good  Habit says, “Listen to Benjamin Franklin, Don’t put off until tomorrow what you can do today.’ Mr. Franklin would tell you to clean your basement today.”

Bad Habit says, “Now why would you want to do that? You should listen to Mark Twain, ‘Never put off till tomorrow what may be done day after tomorrow just as well’.  Really, you can clean your basement tomorrow.”

2. Bad Habit says, “Drive to the hardware store and buy a new hammer if you can’t find the one you didn’t put away. What’s the big deal?”

Good Habit says, “Buying a new hammer is wasteful. The cost of gas plus the cost of the hammer is expensive. And now you have ten hammers in the basement, and you keep tripping on them.”

3. Bad Habit says, “Don’t clean your basement and get rid of anything, you don’t have to create anything new. Just keep dusting off your past.”

Good Habit says, “Stop dusting and get rid of clutter. Clean your basement and create.”

Do your bad habits creep back on you when you aren’t looking?

The basement will get clean.

Today I want to write. Which is a good habit.